Yesterday night, I took a walk in Hansen Park in Pleasanton, CA. The planet Venus was glowing very brightly in the sky, and I decided to take a photo of it with my phone. I confirmed it was Venus via the Google Sky Map app for Android. You know it was glowing very bright because I'm night blind and I can only sort of see moderately bright light sources.

I know there will be questions about my vision loss. Let's start off by telling you what I can see at night. At night, I can generally see moderately to extremely bright light sources with limited to no depth perception (unless my photophobia acts up and I've got my dark sunglasses on). I can usually make educated guesses as to what the object might be by groups of lights (such as with cars, but I won't know how far it is from me), the brightness of the light (such as with street lights), and by the direction I'm looking in (such as with aeroplanes because I'm looking at the sky). Generally I can't see the stars in the sky. As for using Google Sky Map on Android, I used my remaining reading vision as best as I can. My reading vision is impaired, but I can read small amounts of regular sized text at a crawl. I usually use the built-in screen reader because it makes things so much easier on a small device like a phone. I originally thought Venus was probably an aeroplane (because that is usually the only things in the sky I can sort of see at night), but my mom said it wasn't moving. Generally if someone is with me on my walk (usually my mom), I'll point to something I'm interested in and ask. 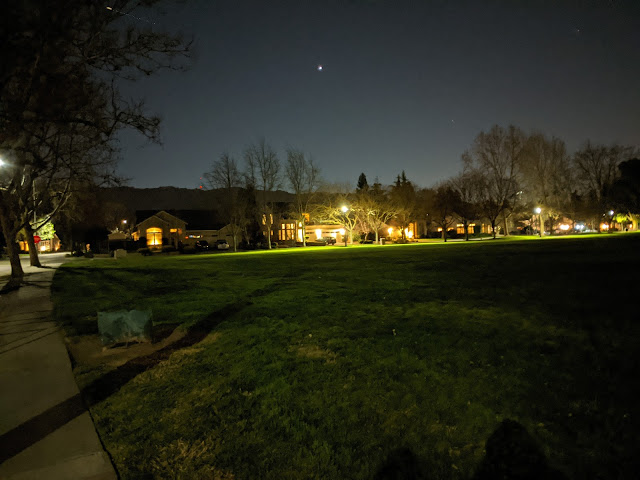 Venus is the bright dot in the sky in the center of the photo.


This is all the photos for today. I hope you have enjoyed the photos! Please don't forget to share with your friends and family members! Also, if you want to get notifications when I post up more photos, "Like" us on Facebook or follow me on Twitter and Instagram. These links can also be found on the top of the right sidebar.
Posted by Sunny Wu at 11:16:00 AM