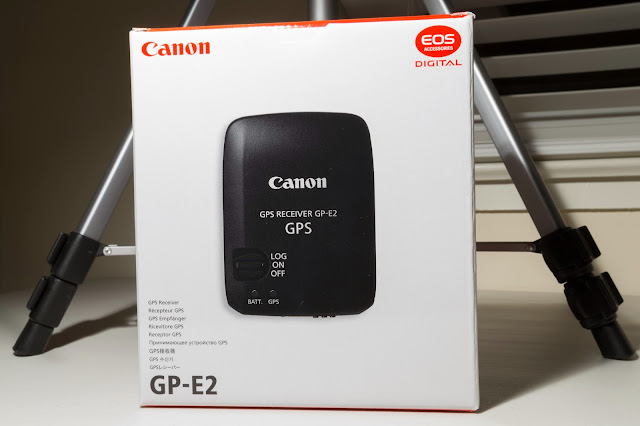 Today I am going to review the Canon GP-E2 GPS. Before I get started, I would like to say that I have used this device for close to a year now, so I can give you a pretty clear look at the device. The device itself is compatible with the Canon EOS 5D Mark III, Canon EOS 6D, Canon EOS 1DX, Canon EOS 7D (with limitations), and a few other Canon cameras.

The device itself attaches to the camera via the hot shoe, and can communicate via either the hot shoe or a USB cable, with the exception of the Canon EOS 7D which is limited to just the USB cable. With the USB cable design, if you do want to use a flash on camera, you can always store the GPS somewhere else and use a flash, or if you don't have a flash, you can conveniently store it right on the camera's hot shoe. Here is a photo of the GPS on my Canon EOS 5D Mark III. 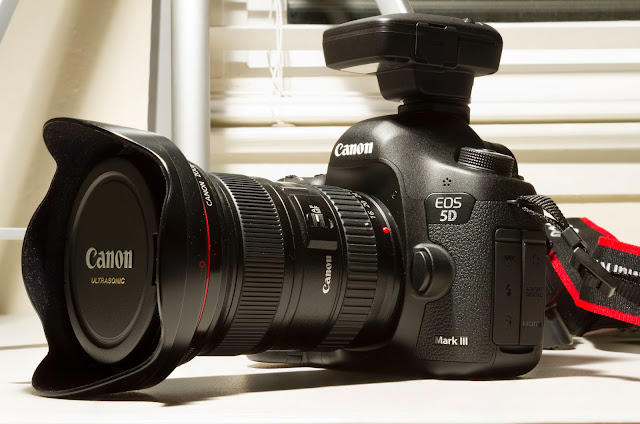 Here is a photo of the device on a Canon EOS 7D with the USB cable attached. I read a review of a guy who accidentally broke the USB port on the camera because the camera strap got tangled on the wire. If you use it this way, be very careful! 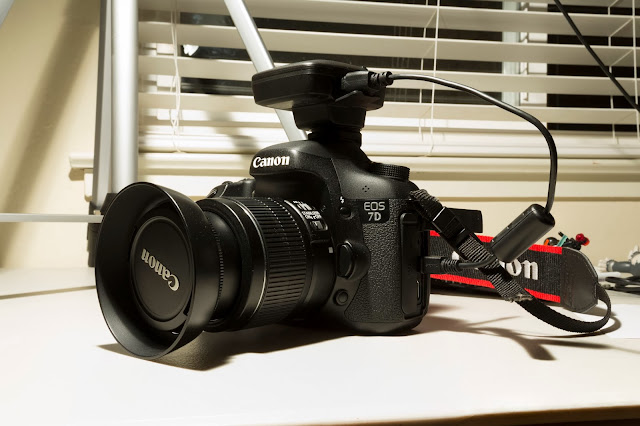 The device it self has a "modified" hot shoe with 1 pin missing. So I am guessing it works sort of like a USB port on camera because of the 4 pin design. Here is a photo comparison between the GPS device and a off-camera flash extension for Canon. 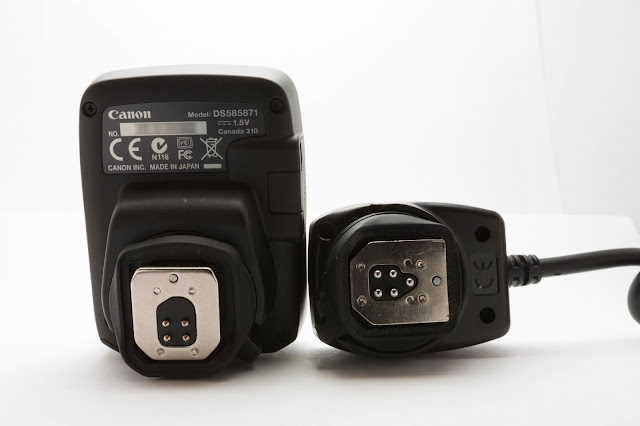 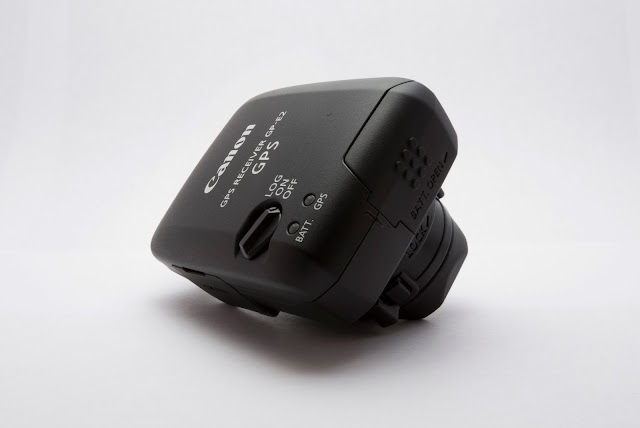 And here is a photo of the GPS device by the Eneloop battery. 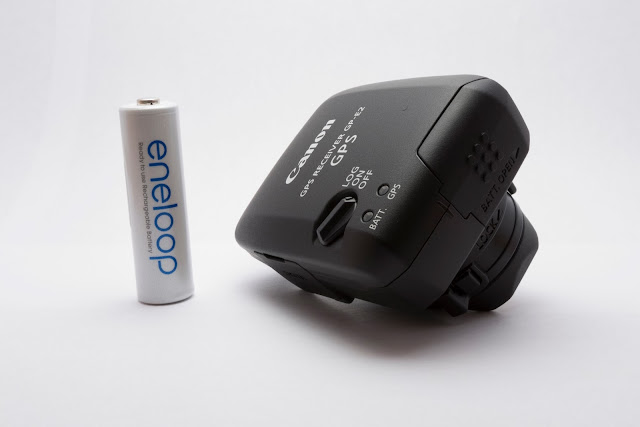 Let's continue talking about the design of the device. The notification lights is a bit awkward. It flashes, takes a break and flashes again. 1 flash is Good and 3 quick flashes is Bad, this is for both GPS reception and battery level. I would rather have a constant red/yellow/green indicator. There is room for improvements. If power was an issue, they could have at least put a button on there that we can press to trigger a status update.


The device itself will record GPS location (if there is reception) and the altitude (if enough satellites are available). The GPS device will even record the compass direction when it is enabled (with the exception of the Canon EOS 7D).

Also in the device, you can record the route that you took by switching the GPS to LOG on the mode dial. Your route will be recorded in the flash memory in the GPS device. This is useful when you want to use a flash, using multiple cameras, and don't want to stick on the USB cable. No compass information will be stored if you do it this way, however the GPS locations can by synced back onto the images in post right inside Map Utility as long as all photos were shot on a Canon camera (there are ways around this, I tell you about that below). To get the route data out, you need to hook up your GPS to your computer and port it out via Map Utility which is the supplied software that comes with the device.

There are a few things I don't like about this feature. The USB port on the GPS look's like a special port, but really isn't. The port is designed slightly differently, but can be used the same way. They only supply you with the special USB cord with the device required to connect the device to your camera. They don't give you any instructions in the instruction manual on how to connect it to your computer. With the "special" looking port, many people get confused on how to plug that special USB cord for the camera into your computer. You aren't suppose to use that USB cord for the camera for this operation. What you are suppose to use is the USB cord that came with your camera! They created a very very hard optical illusion there and I didn't like that very much. Took me a few hours and Googling before I found out. Their customer support was crap too as they told me that I was actually suppose to get one and I was missing one. Almost 1 year later, haven't received anything in the mail even though they promised that!

Another thing with the GPS log is that it is in Canon NMEA format. What is Canon NMEA you may ask? Well it is just a corrupt standard format with all the information in there marked as "invalid" except for the 1st and last records. Canon probably did this so the GPS can't be used with other brand cameras as Map Utility will only map photos taken by a Canon camera. There is a way around this and it is by using the software GPSBable which will convert the Canon NMEA format into any format and you can use another software to do the mapping. Just make sure you have the software accept the "invalid locations". The Map Utility software only allows you to convert to Google Earth KMZ in the software. Below is a screenshot of what the map looks like in Google Earth. This is a route I did to test it out at a local park called Shadow Cliff Regional Park located in Pleasanton, CA. 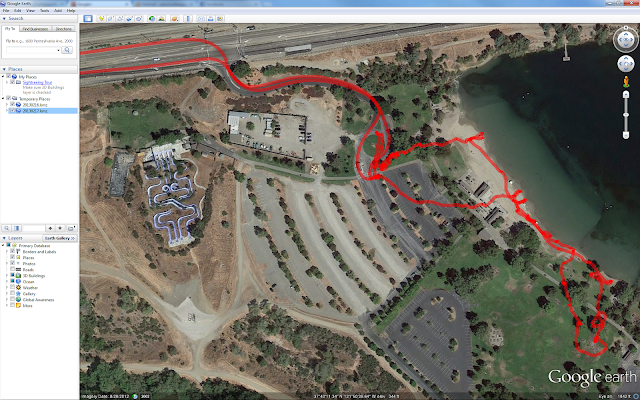 If you are using the GPS device to record your route, it does make a new file every 24 hours according to GMT. That means if you live in another time zone, you may get several map files instead of just one. Below is a screenshot of the Map Utility with the several route files that the software created while testing the route feature. The one I have activated is from Shadow Cliff Regional Park in Pleasanton, CA. You can also see that Map Utility is pretty much just a software with Google Maps embedded. I found some issues with the map loading slowly and freezing up, but I think this is because Internet Explorer is "hosting" the frame, so this isn't Canon's fault. 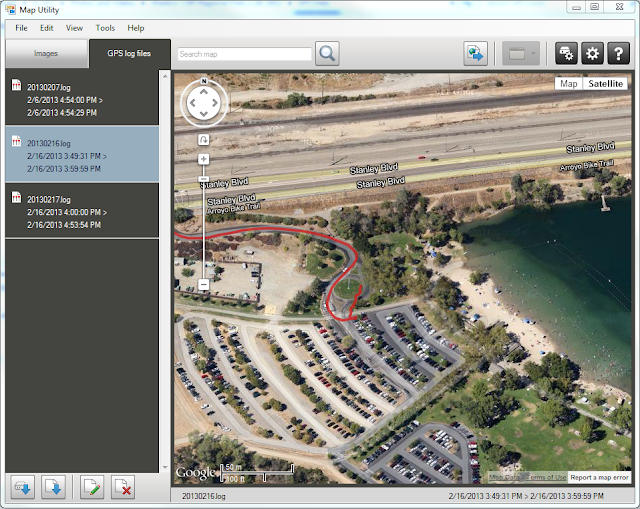 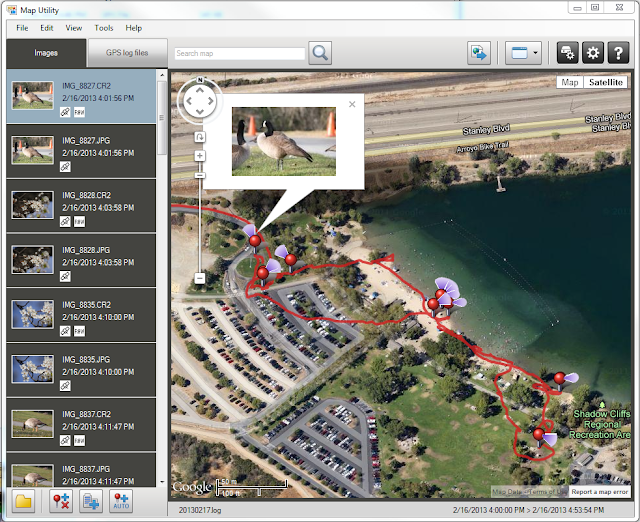 Shadow Cliff Regional Park was a pretty open area with some trees, but mostly just open grass areas. The GPS was very very accurate when I shot there and the worst I had was being around 5 feet off. This was not the case when I went shooting the Chinese New Year Parade in San Francisco. Being surrounded by tall skyscrapers, the device got pretty inaccurate when I got there. I did some drawings of the route and photo locations files I got while in San Francisco. The red lines was the original route the GPS recorded. The blue line was the correct route I drew in. The green circles and arrows point to where the photos were suppose to be located. 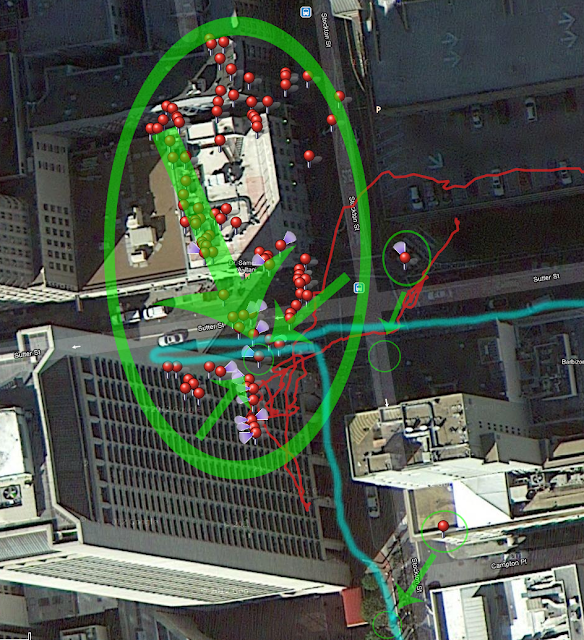 As you can see the device is not very accurate when being surrounded by skyscrapers in San Francisco. Here is another "corrected" screenshot. 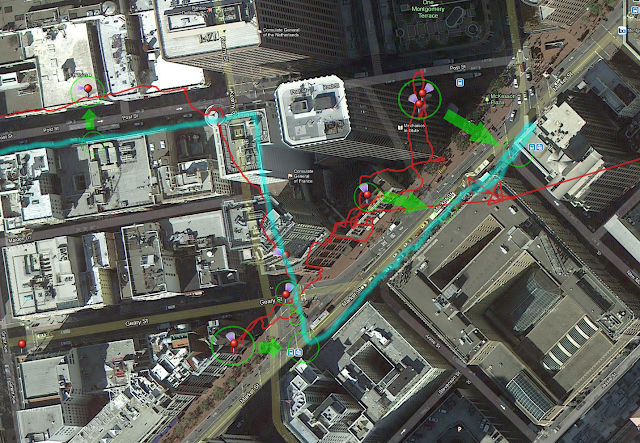 The device however was very accurate for the entire BART ride on the way there. It was pretty fast to update too, except when BART entered tunnels. Whenever the device looses the signal, it will draw a straight line between the where it first lost the signal to where it regained the signal. This is why you see that line between Oakland and San Francisco. 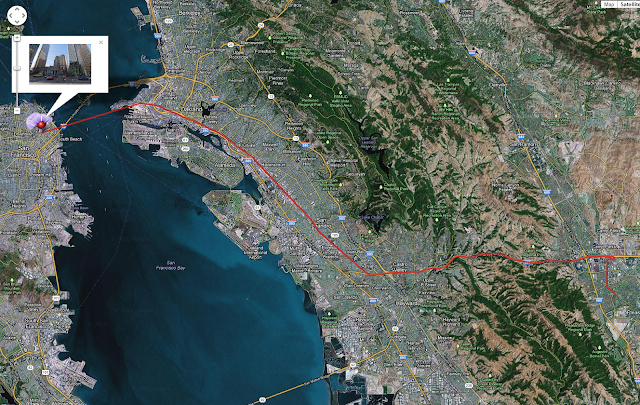 So to summarize the accuracy, this device performs well in open areas such as forests and recreation parks, but when you get into big cities, it will get inaccurate fast from skyscrapers.

Now let's talk about the improvements I would like to see in this. A focus assist beam would have been nice. They just needed to add an LED inside (like 5 cent in cost?!), but they would have a small issue with only 1.2v to 1.5v with the one AA battery. I wouldn't mind the weight of an extra AA battery if they added that feature. Would have liked the Speedlite radio control system inside (extra price is fine with me). It is not like they need an LCD on it, all the controls are in the camera's menu, just needed to add a chip and radio inside. Could have also added a optical trigger (again, a few extra LEDs would have done the job). For the price, would have preferred to have at least one of these features in it.

To summarize my review, I believe this device is worth it for every penny as long as you have a compatible camera except the Canon EOS 7D due to the limitations. I found it very useful in mapping out my shots and being able to tell my followers where something was taken. I always felt sad when someone comes to me and asks where I shot it because they want the same shot, and I had to tell them I had no clue. The device is very accurate and great for the great outdoors and big open areas, however, no GPS is going to be perfect in a big city with skyscrapers, including this one. I would recommend you use Eneloop battery with this device as you will get almost a whole day of shooting with one. Canon definitely have some room to improve, but I believe I got a very great deal out of this.


So this is pretty much for my review. Here is a "list" version of my review:

Pros:
Cons:
Future Upgrades:
Please don't forget to share the blog post with your friends and family members! Also, if you want to get notifications when I post up more photos, "Like" us on Facebook or follow me on Twitter and Google+. These links can also be found on the top of the right sidebar.
Posted by Sunny Wu at 2:51:00 PM