I went to the Consumer Electronics Show (CES) in Las Vegas, NV this year! There was so much cool electronic gadgets to see. I went on the last two days of the convention (Thursday and Friday). I obviously didn't get through all of the exhibits. I got so carried away looking and playing with the cool electronics, that I forgot to vlog and take photos for a lot of the stuff at the convention. Even with that, I still have a pretty good collection of shots to show you that I took at the convention. I hope you enjoy viewing the photos. The photos will be split into four blog posts. If you haven't watched my vlog yet, you can do so here. In the vlog, you can see some of the products in the photos here in action. Obviously, I can't animate a photo! :)

Here is part 3 of the photos from the event. Coming up in this blog post: robotics, toys, and much more! 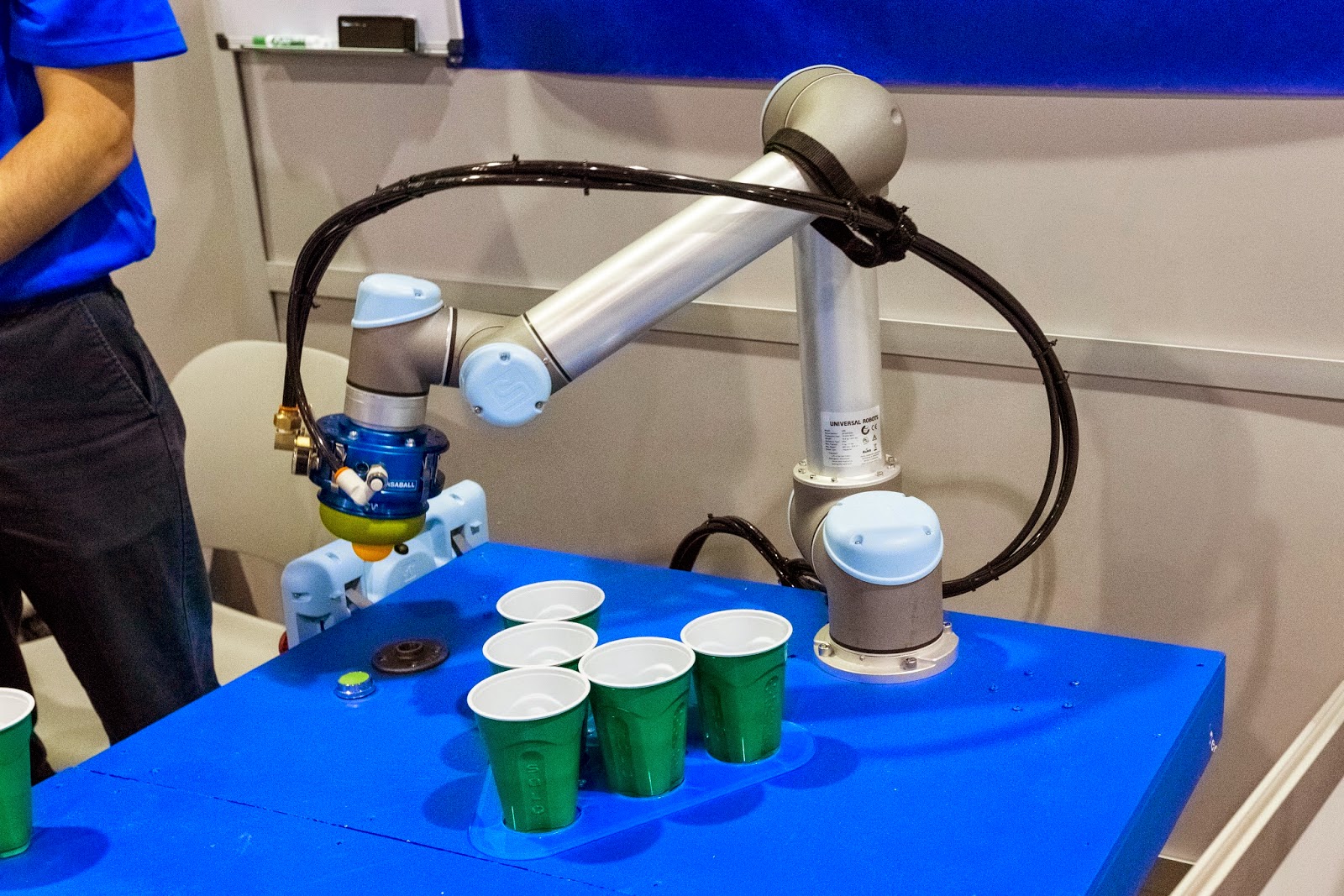 This is something called the Versaball from a company called Empire Robotics. The robotic gripper arm can pick up a variety of things. Right here, they are demoing a beer-pong game with the robotic arm, except the cups at no beer. 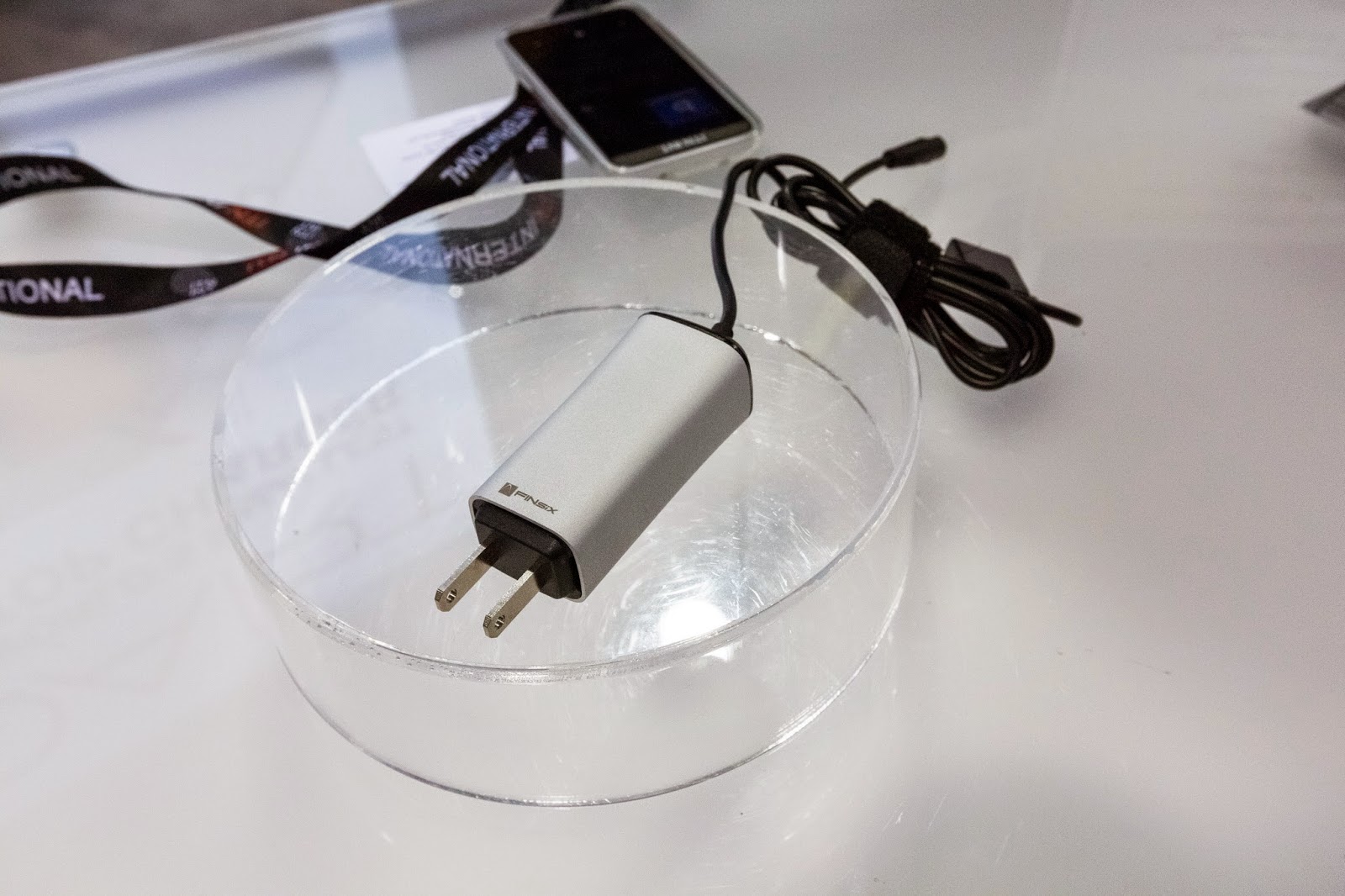 A company called Finsix is trying to make the world's smallest laptop charger. This charger is quite small right? It is very tiny. I can see potential in this product. If it is one thing I hate, is taking along my Chromebook charger because it is too bulky. 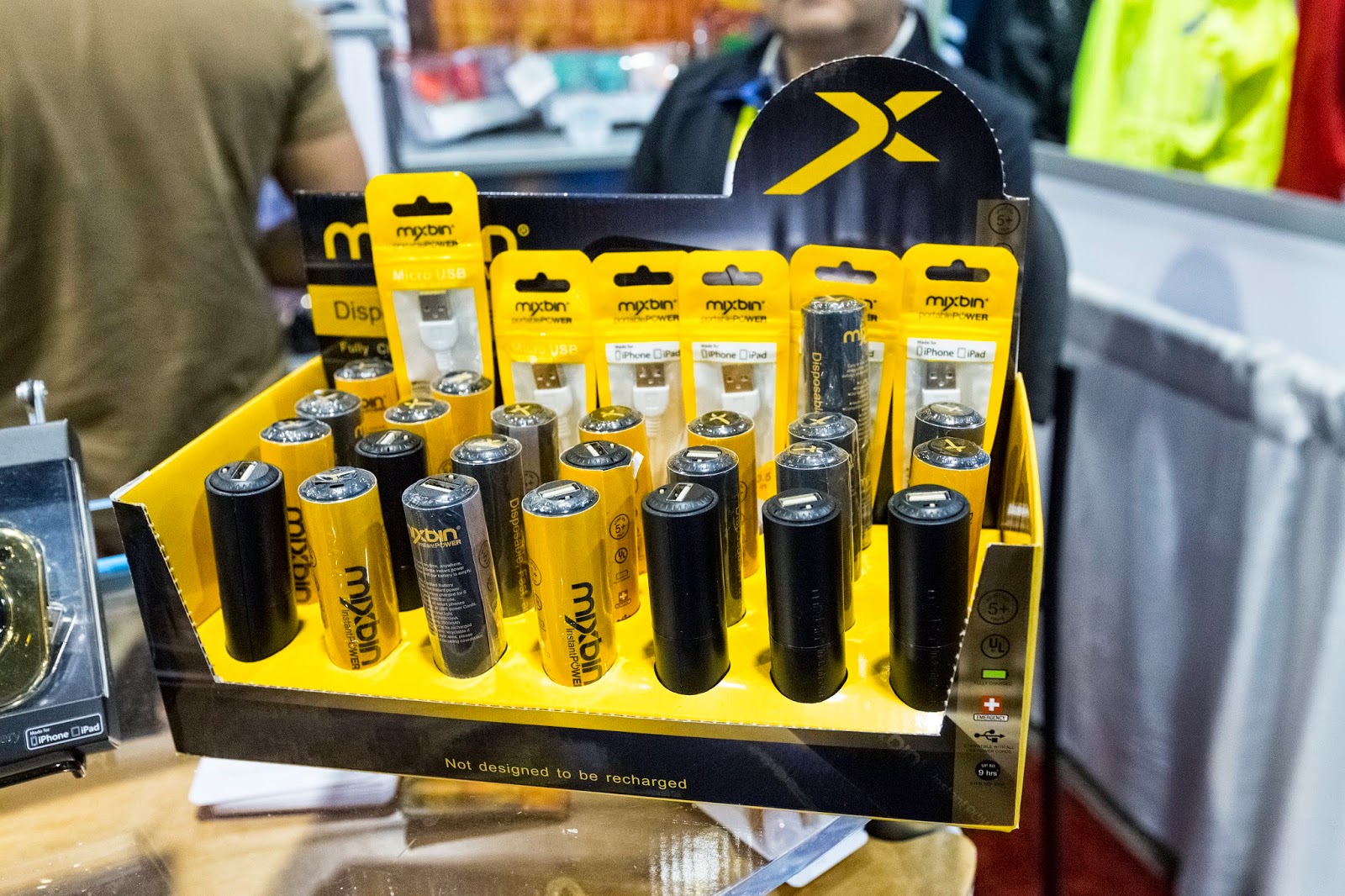 A company called MixBin is making one time use portable power banks that comes fully charged and has a shelf life of over 5 years. The company told me they will send me a free sample... If I get one, I'll tell you guys how it goes! The capacity doesn't seem very high though considering how my Nexus 5 have a pretty large capacity battery. I can see some people using this, but for me, I have a rechargeable one I usually keep with me, so I probably wouldn't need one of these. 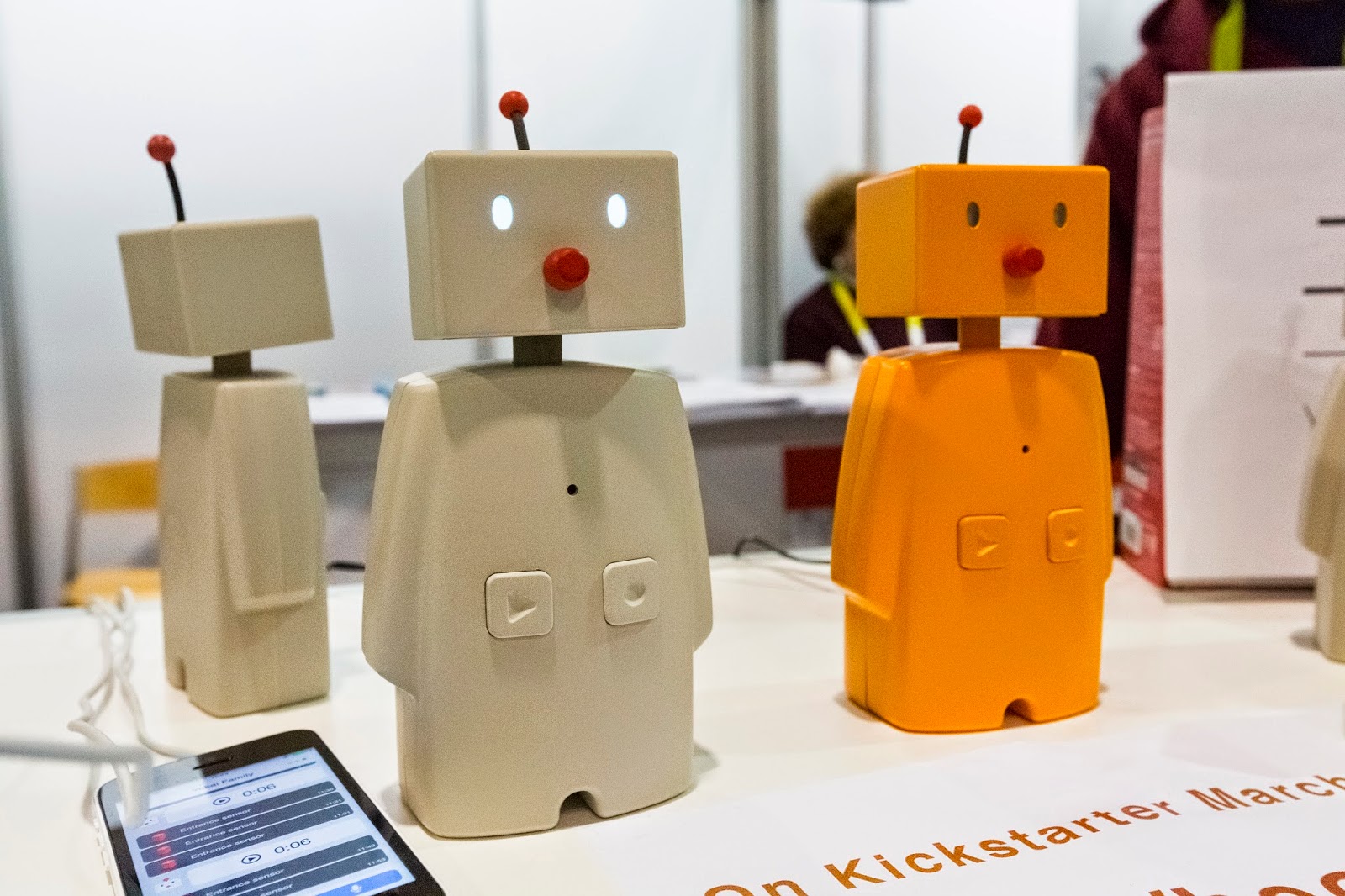 I think these are robot shaped Bluetooth speakers. Pretty cute. :) Forgot which company this is from though. 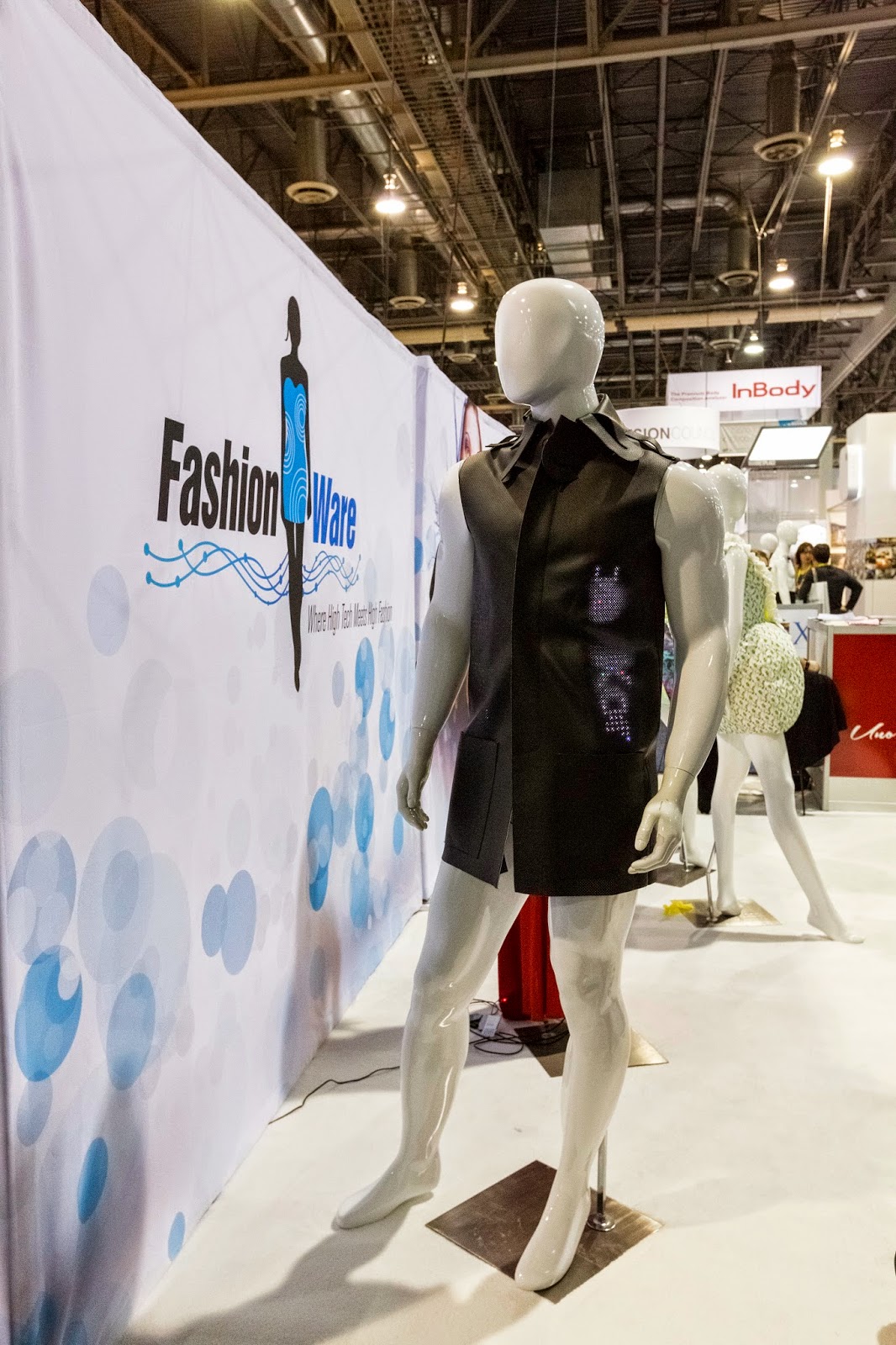 A company called Fashion Ware designing clothes with electronics and lights on them. While pretty cool, I am assuming they ran out of female mannequins here? That's what my friend and I joked about. LOL 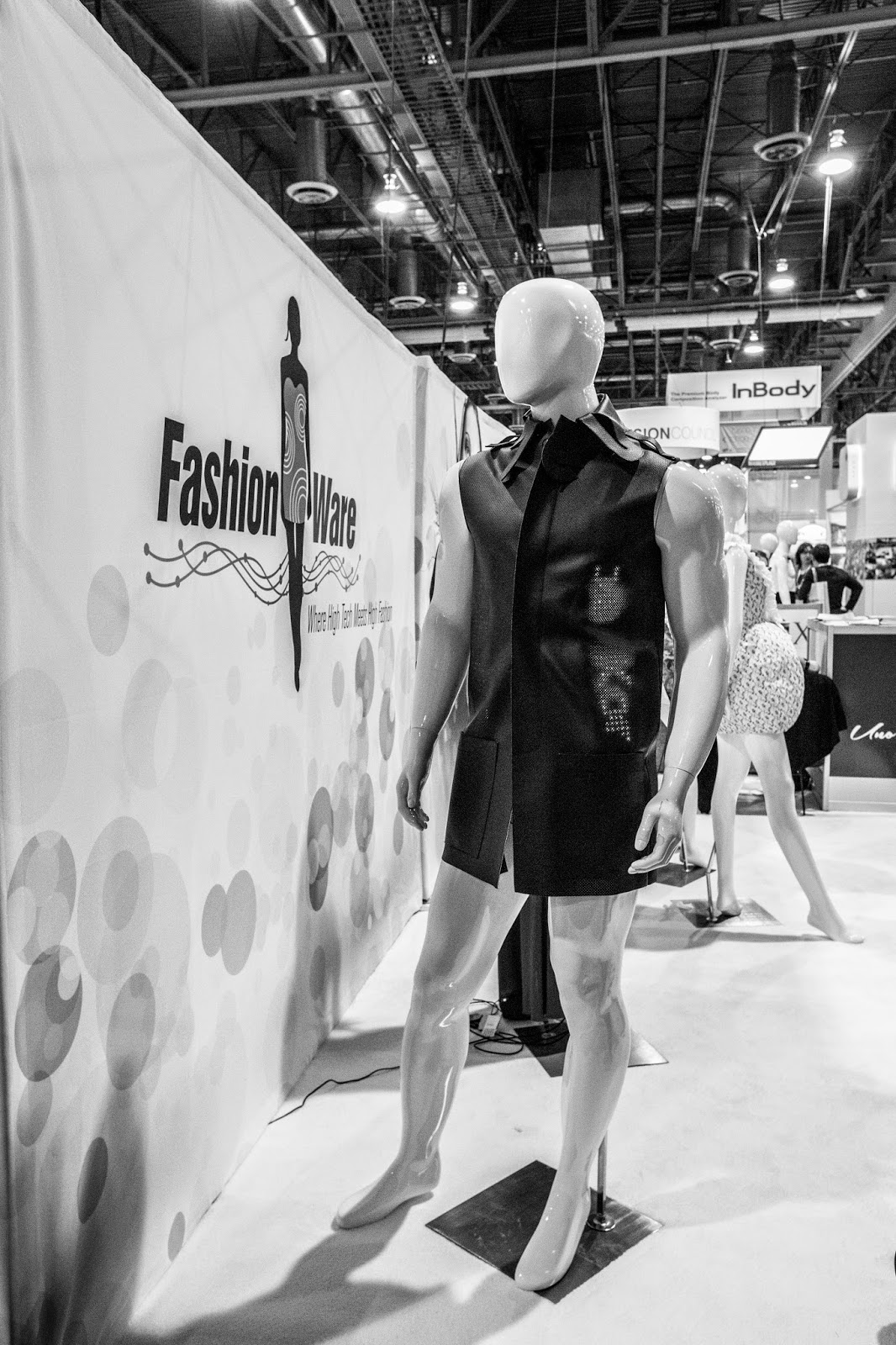 Black and white process of the photos above. 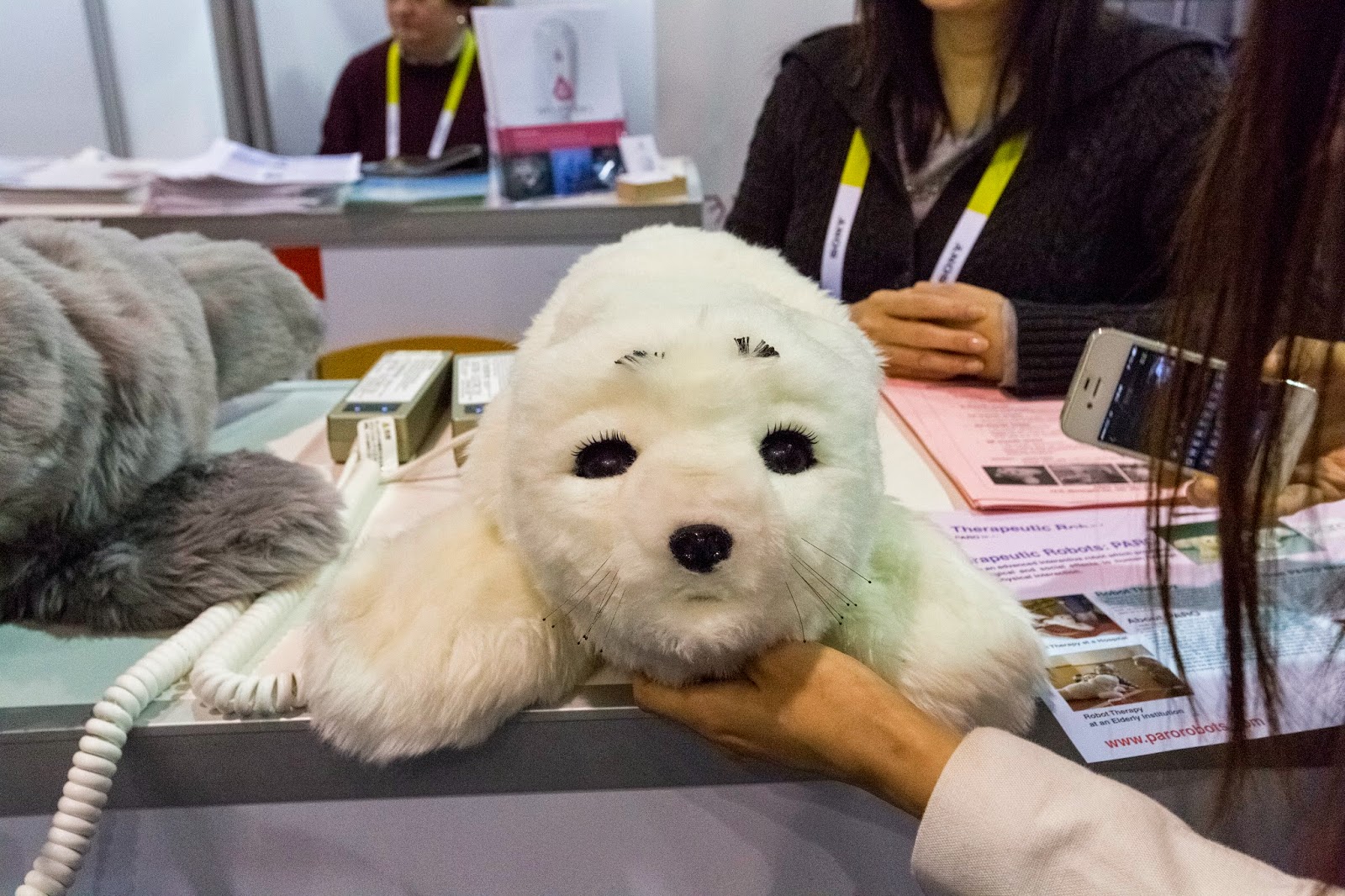 This company is designing therapeutic robotic pets. The robot does move. Sadly, I forgot to shoot some video of this, however you can see a similar company with the robotic dinosaurs which will be in the next blog post and I did get a short segment of video of that in my vlog. 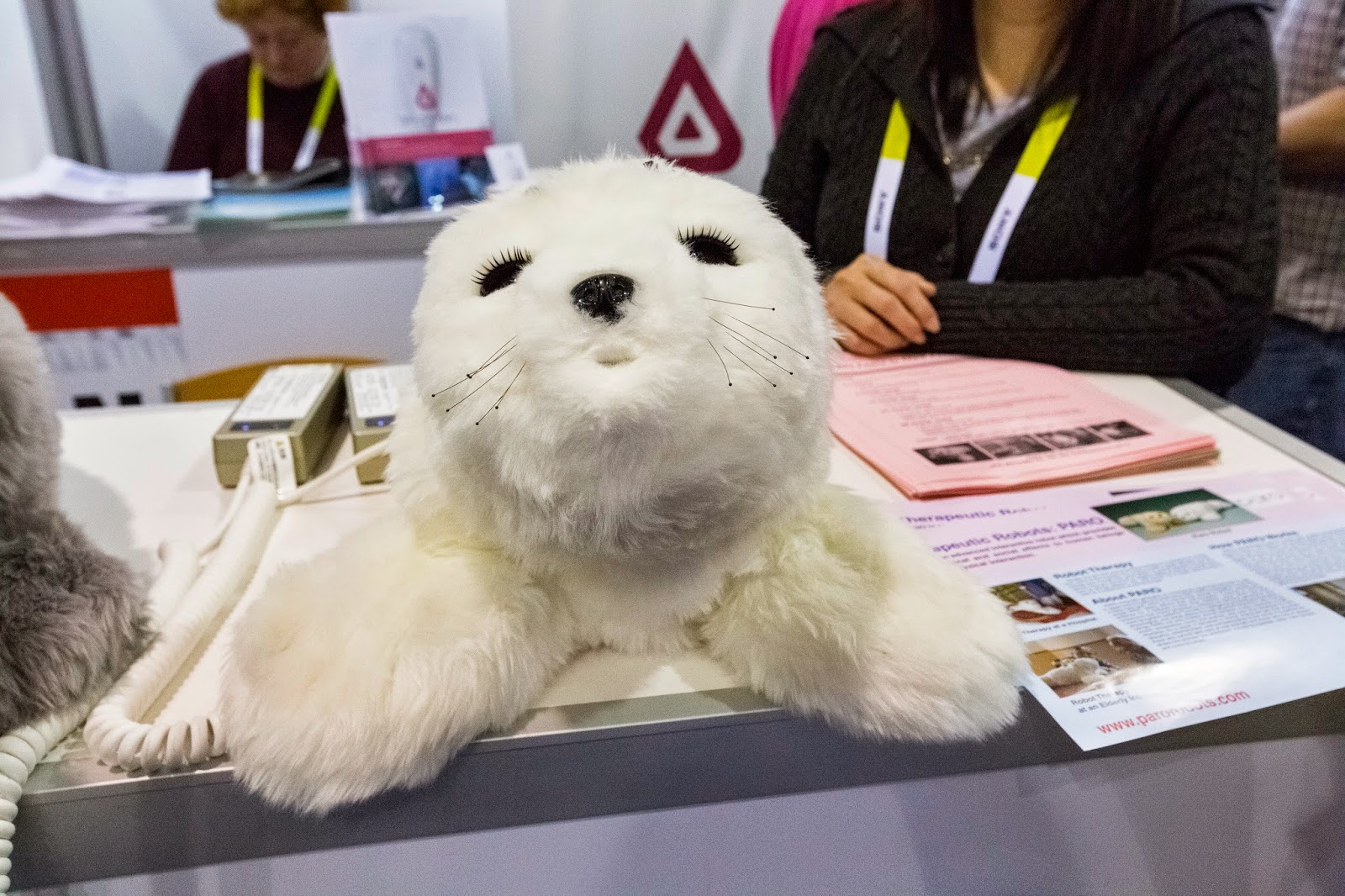 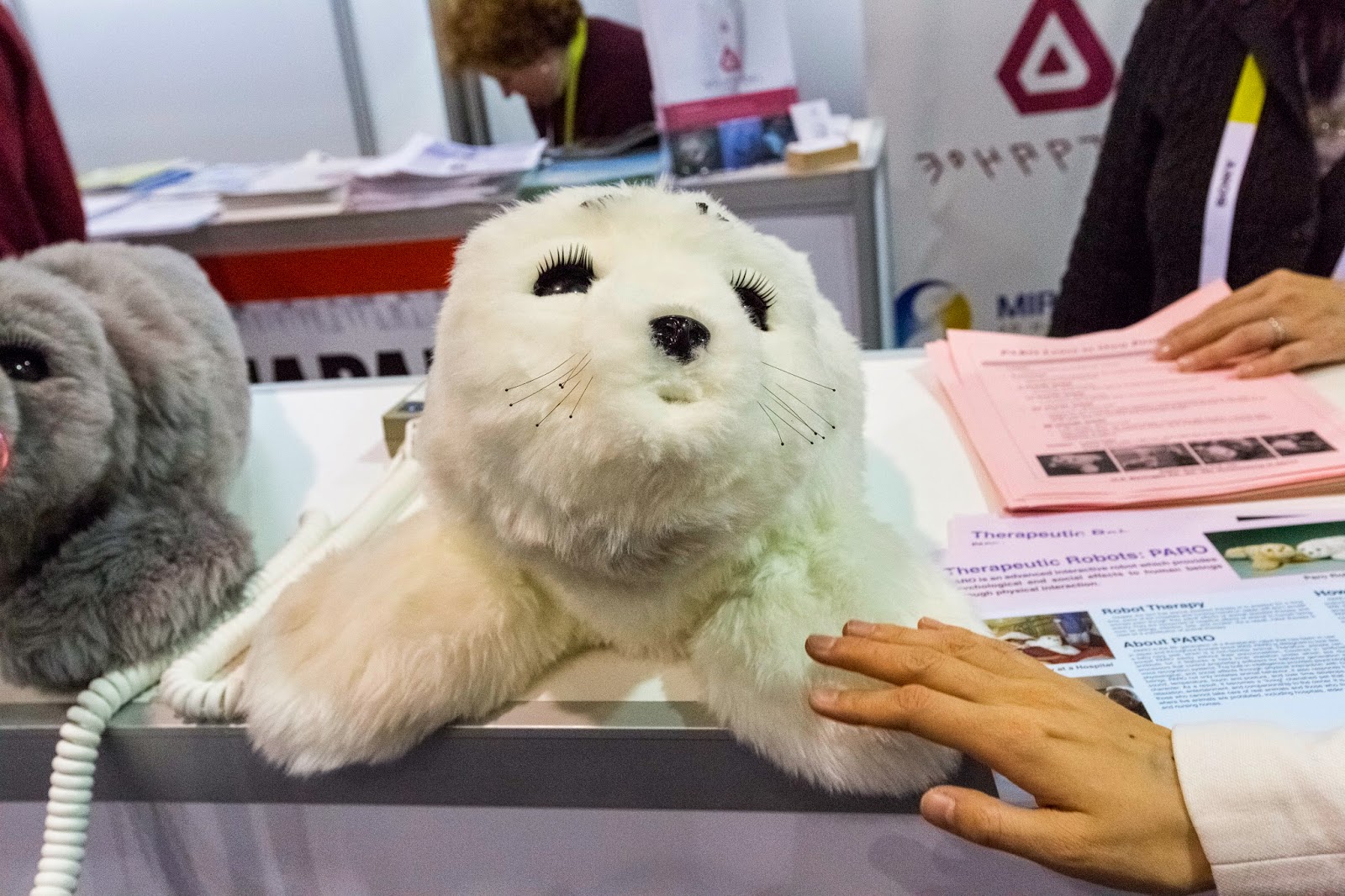 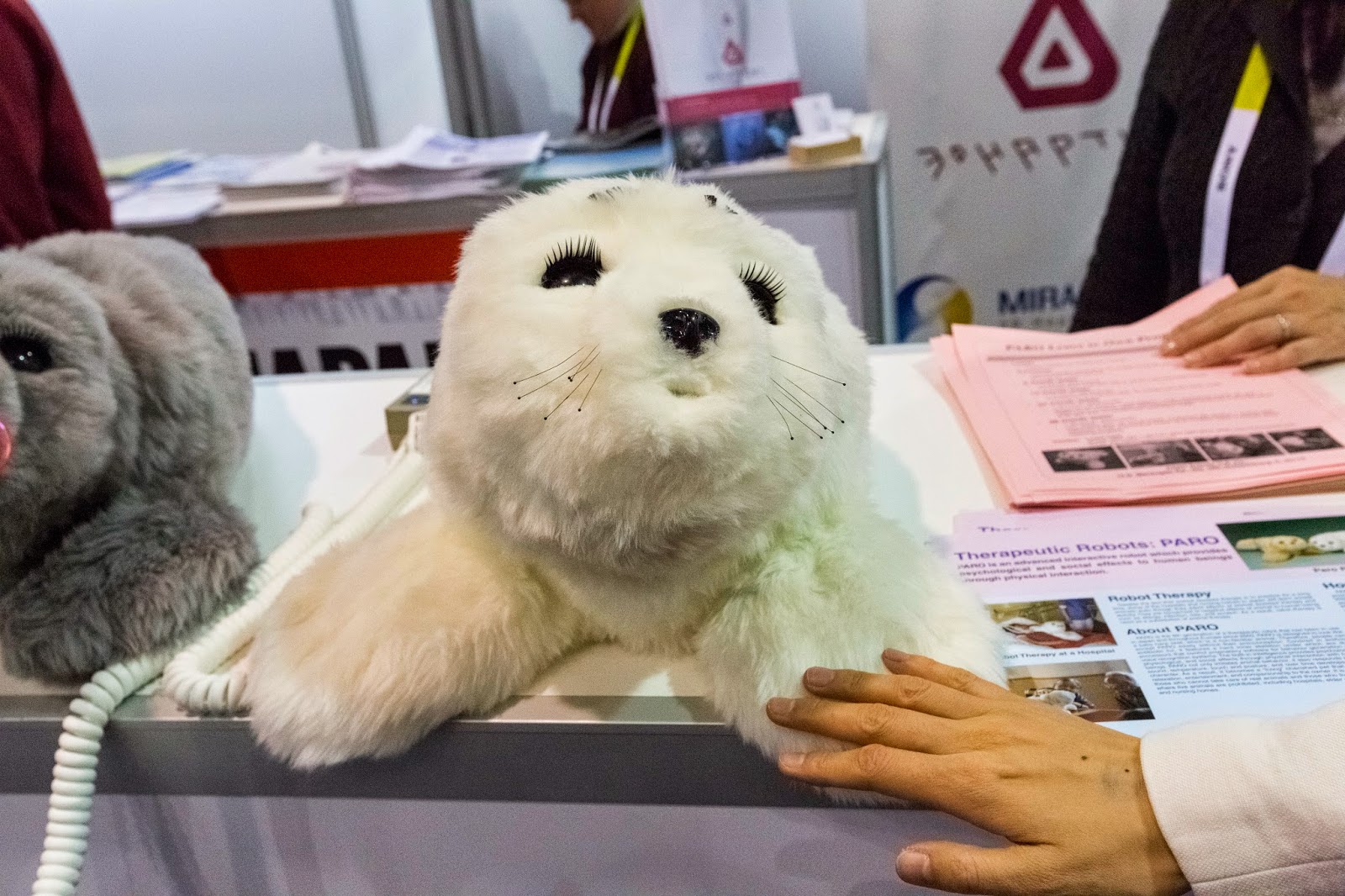 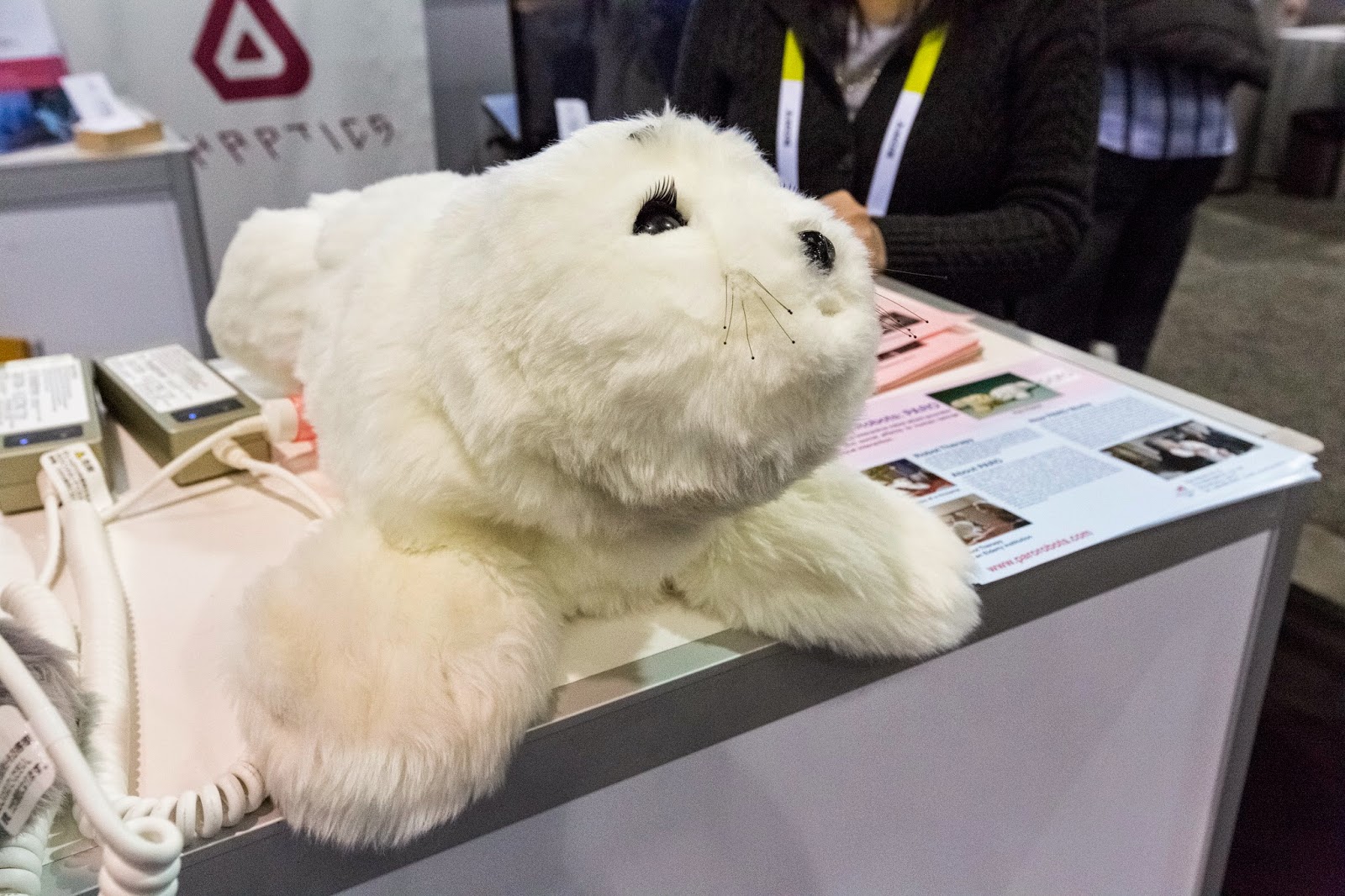 A few more photos of the robotic sea lion. 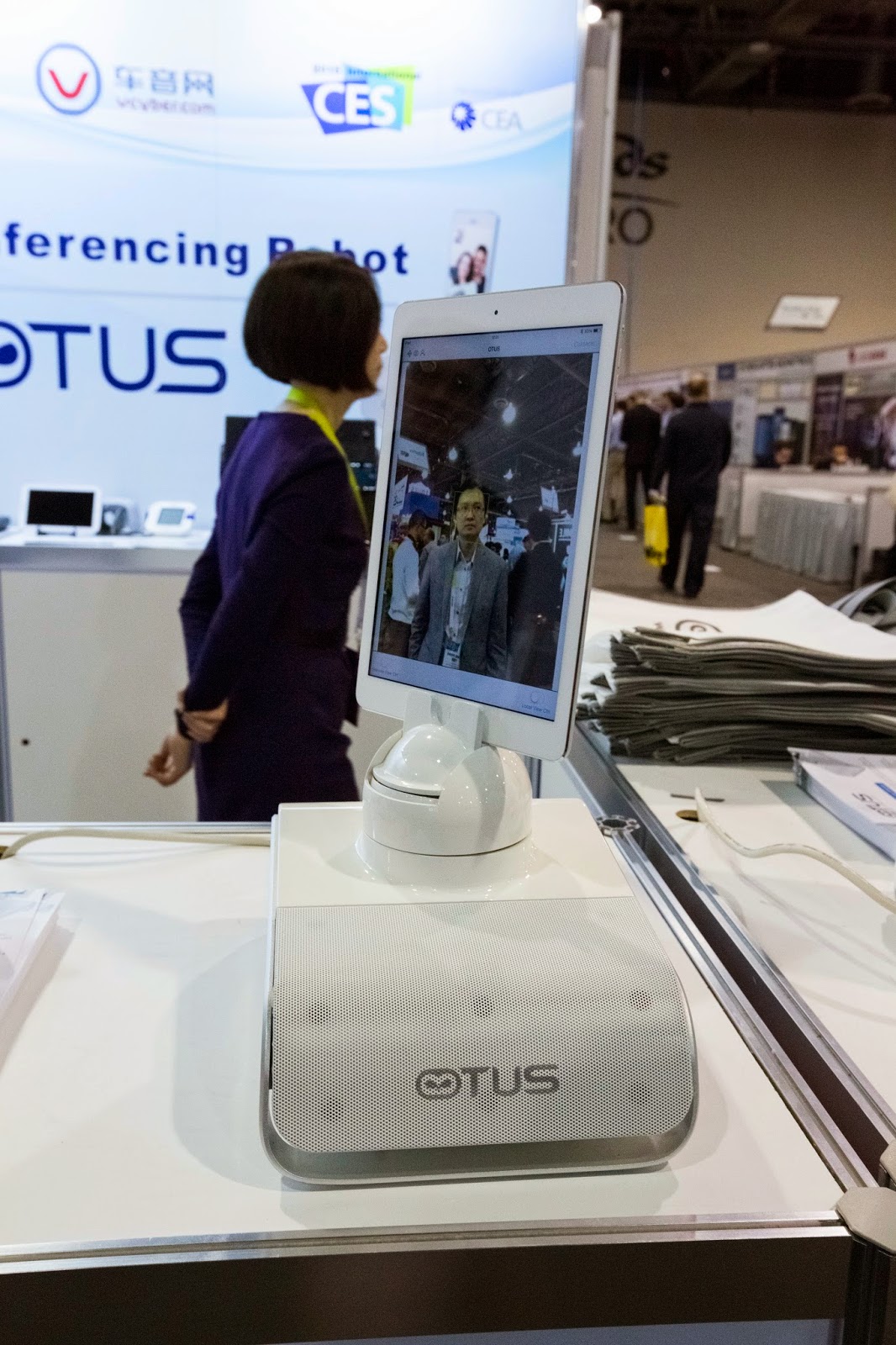 This is the Otus video conferencing robot. On the demo the robot is hooked up to an iPad. The device can detect the face a person and track it by rotating the platform the tablet is on. 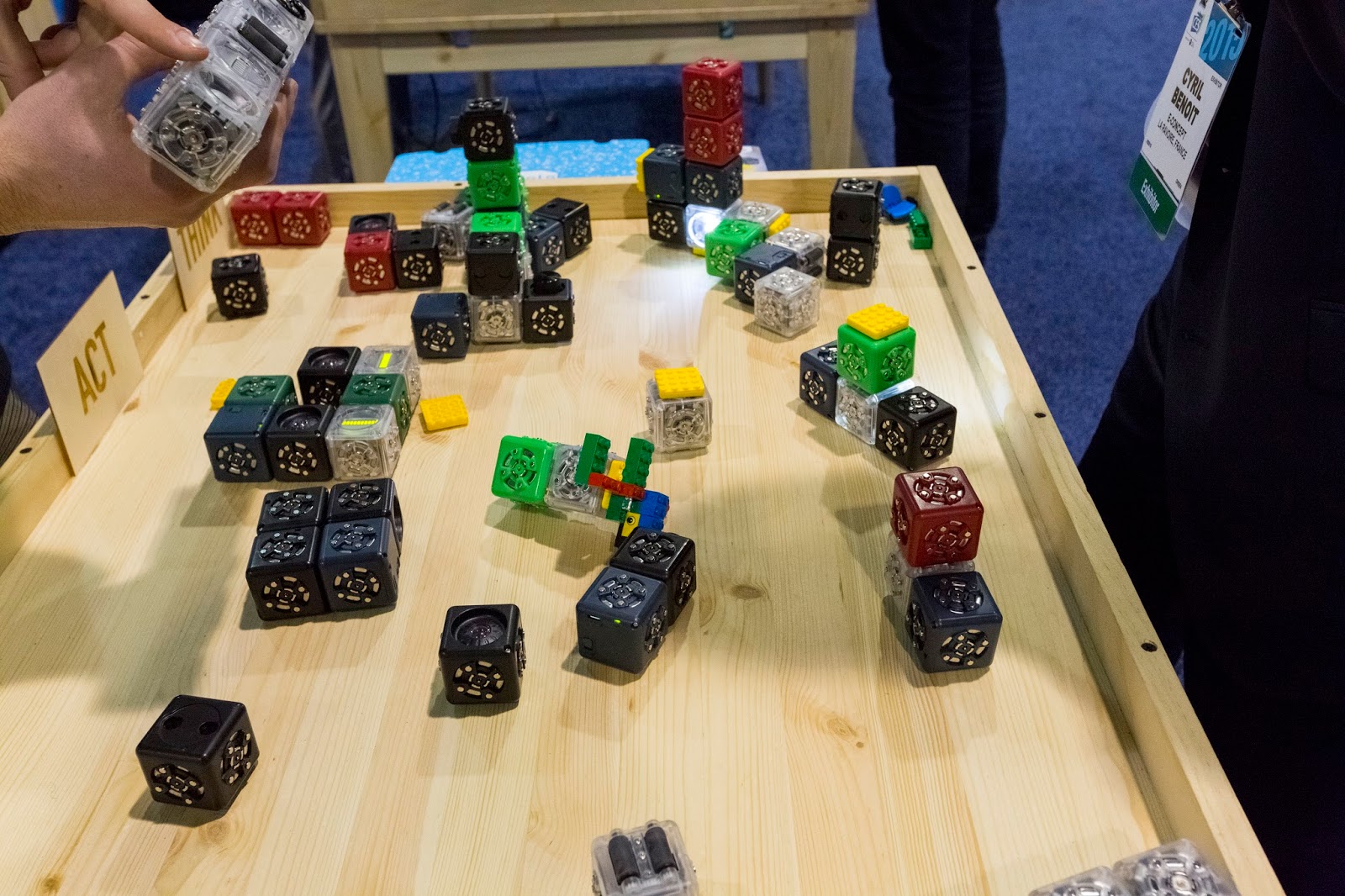 An electronics toy called Cubelets made by a company called Modular Robotics. This toy is somewhat like Lego Mindstorms. You can build using different blocks to make a robot or electronics creation. 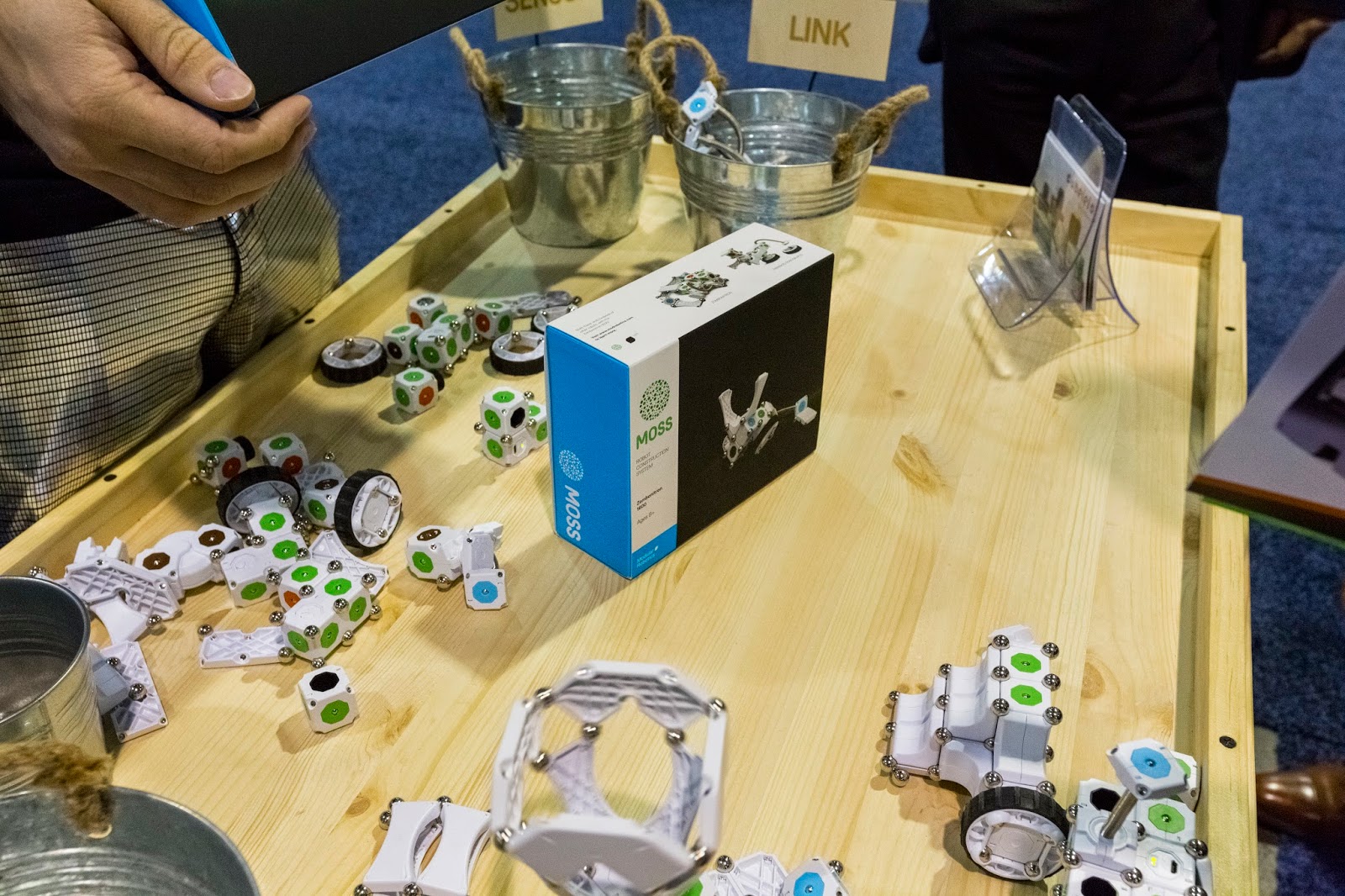 Here is another toy designed by Modular Robotics called MOSS. It is similar to the toy above but use ball joints for even more creation possibilities. 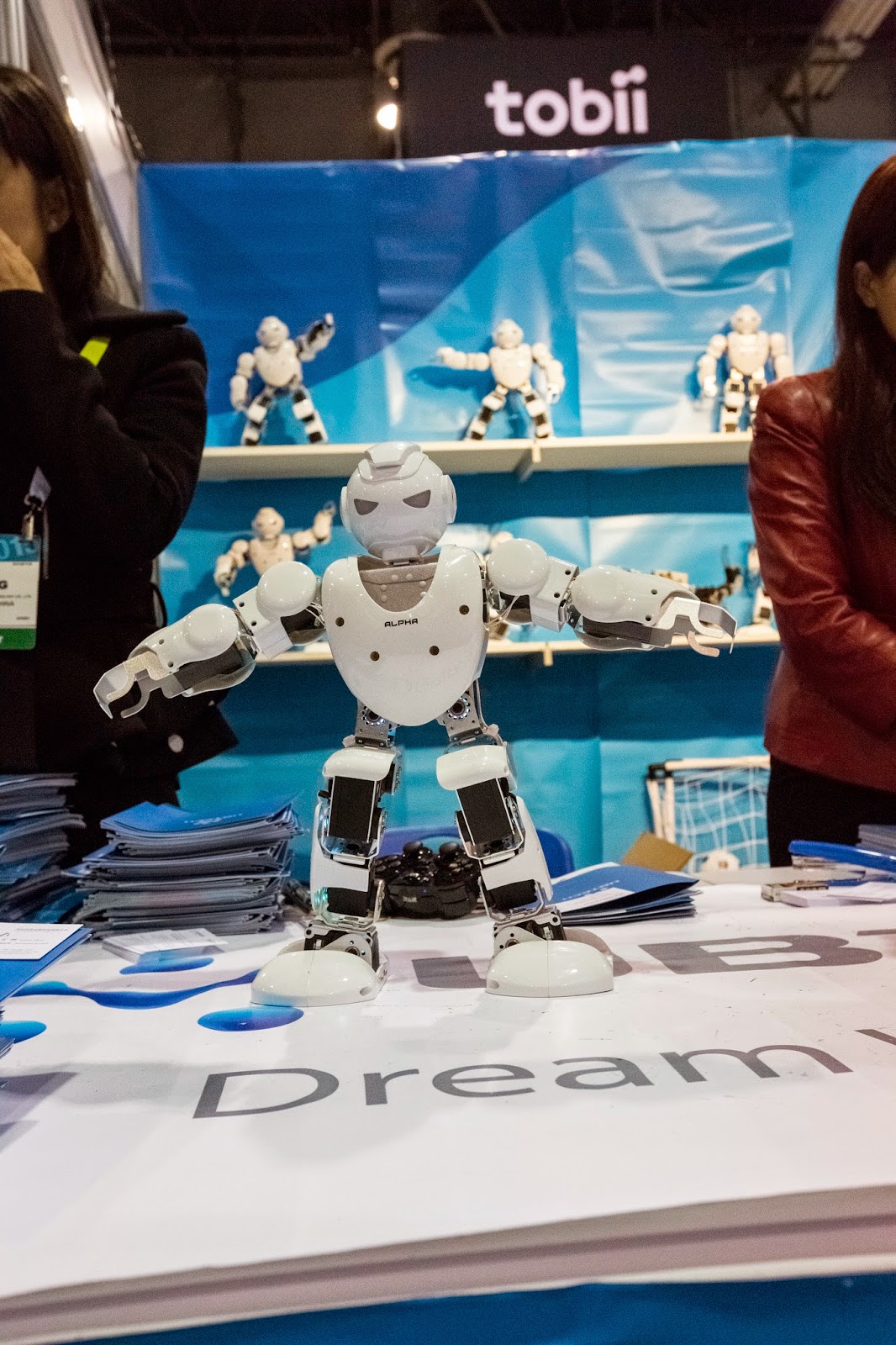 A company making robots called UBTech is making these. Right here is a model of their dancing robot, which is more of a toy for entertainment purposes, however the company makes some non-toy type robots. The company has a vacuuming robot, a robot that alerts you in the event of danger such as smoke or carbon monoxide detection, and also an artificial intelligence robot. The company makes multiple types of robots. 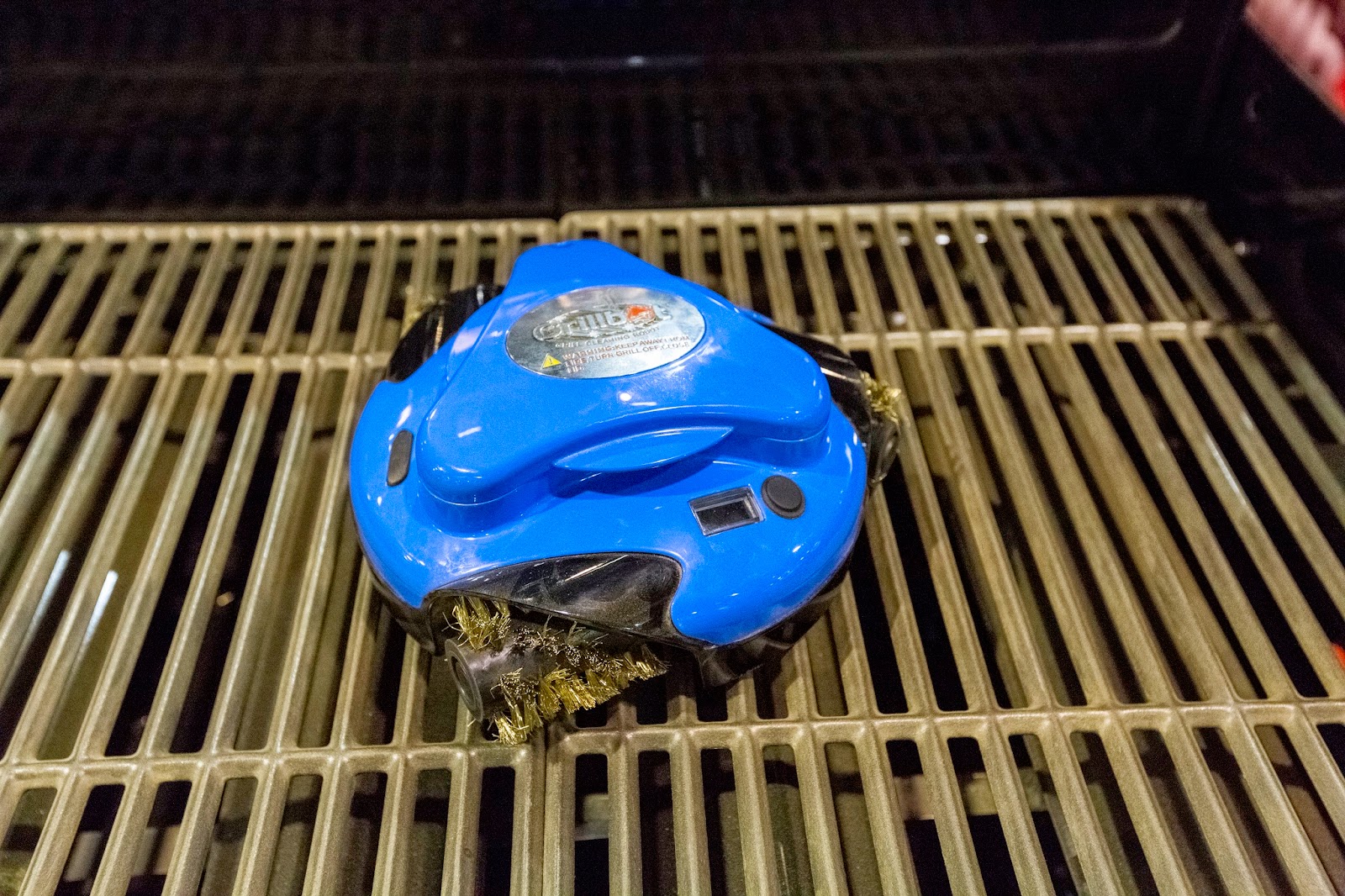 This is a robot that automates cleaning out your grill. This robot will run around your grill while it is scrubbing it clean. The product is called the Automatic Grillbot.


These are all the photos for today. I have more CES 2015 photos next time (toys, 3d printers, humanoid robot, etc...). Please don't forget to share the blog post with your friends and family members! Also, if you want to get notifications when I post up more photos, "Like" us on Facebook or follow me on Twitter and Instagram. These links can also be found on the top of the right sidebar.