Now let's introduce you to the photos for today. The photos for today was from the 2nd day of my trip. I have more photos from Cook's Meadow and on or near the Sentinel Bridge. I have black and whites, HDR compositions, regular landscape shots, and some close ups for today. 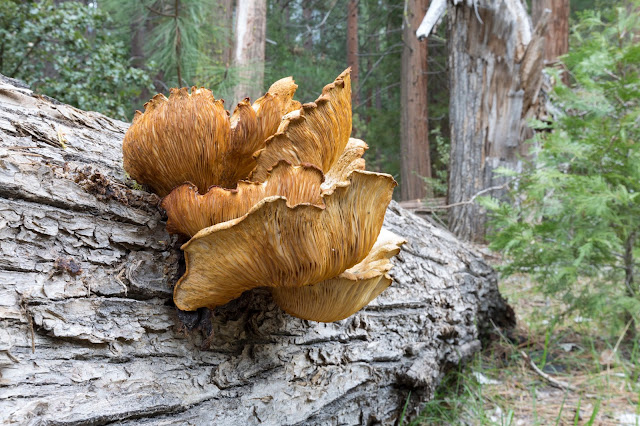 Anyone know the species of mushroom this is? I tried to identify it but I can't. If you know, please comment below. 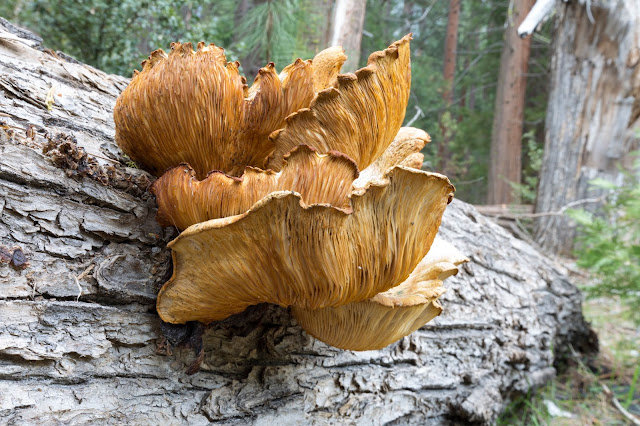 A closer photo of the mushroom. I found this mushroom near the Sentinel Bridge. I decided to get down to the shore of the Merced River (toward the Half Dome direction). I saw this giant mushroom on a fallen tree and decided to get a photo of it. I looks pretty interesting in my opinion.
Approximate GPS location (type into Google) according to the Canon GP-E2 GPS Receiver: 37 44 37 N 119 35 22 W 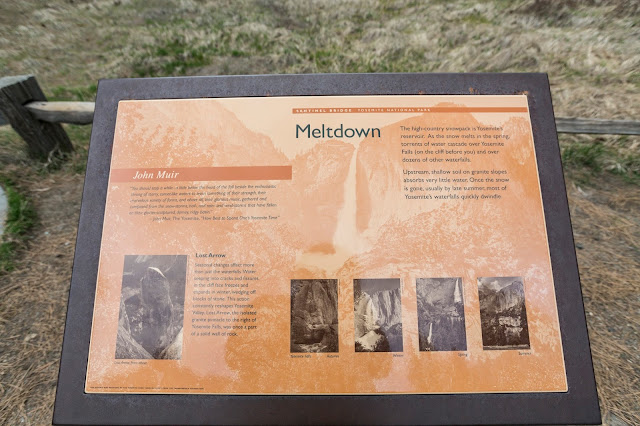 After a while, I decided to head back to the car to wait for my dad. Our car was at the parking lot near the Sentinel Bridge. This was a sign talking about Yosemite Falls. 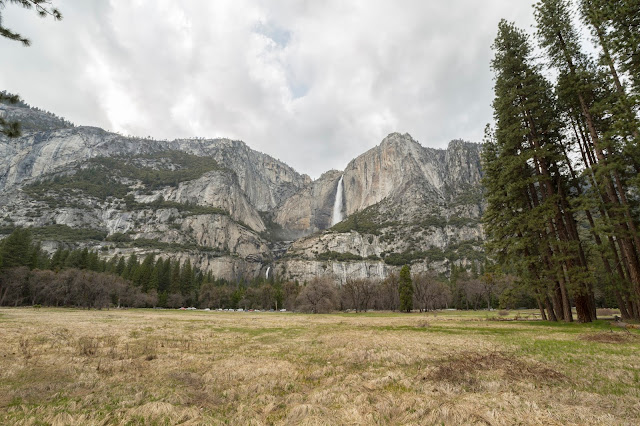 After waiting for a while and have no clue where he went, I decided to get a few photos of Yosemite Falls which was across Cook's Meadow, from the parking lot.
Approximate GPS location (type into Google) according to the Canon GP-E2 GPS Receiver: 37 44 39 N 119 35 24 W 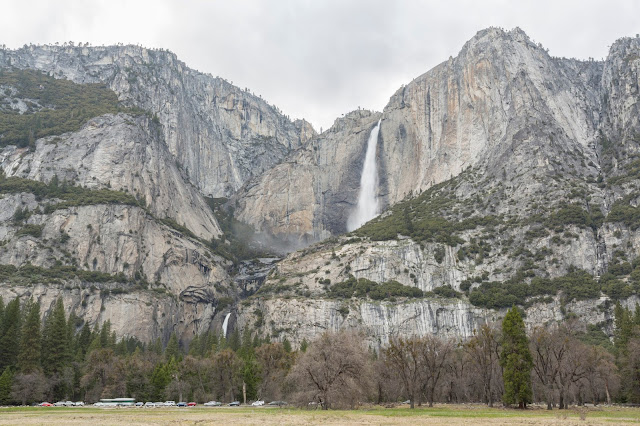 A zoomed in shot of Yosemite Falls at the same position. 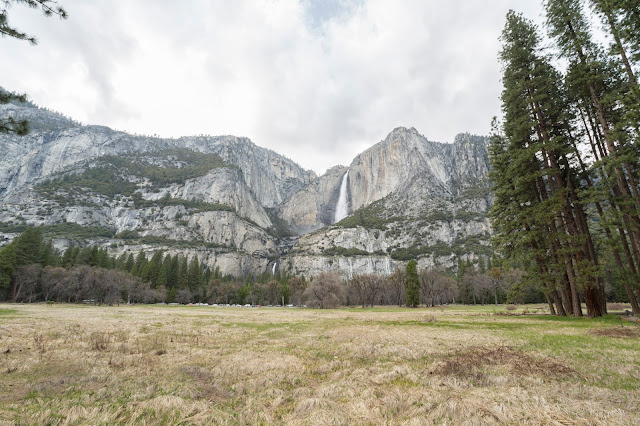 Another photo from the same position of Yosemite Falls and Cook's Meadow. 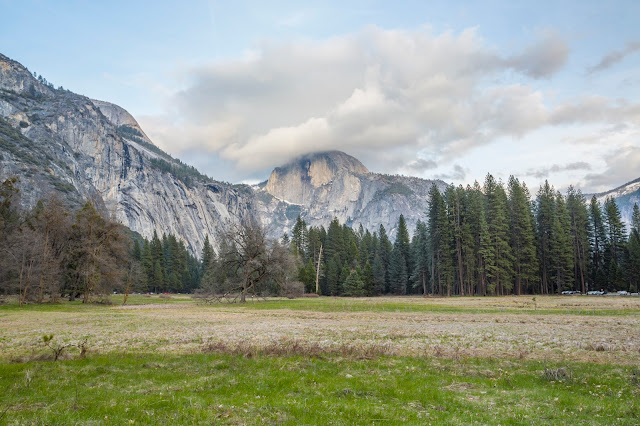 HDR composition of Half Dome near Northside Drive in Cook's Meadow. After my dad came back, we drove toward the trail up to Lower Yosemite Fall. I saw a cloud floating over Half Dome and decided to pull over at my favorite place to photograph Half Dome. I found (over the course of several trips) at this position, the rule of thirds worked the best when your focal length was between 35-50mm. I shot this photo at 35mm.
Approximate GPS location (type into Google) according to the Canon GP-E2 GPS Receiver: 38 57 30 N 120 30 25 W 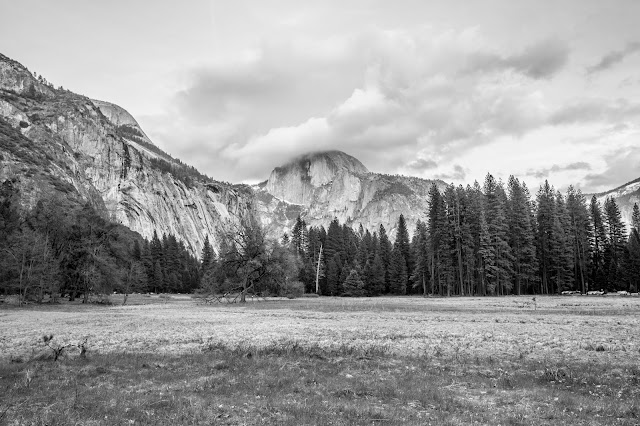 The same photo as above processed in black and white to bring out the details of the clouds better. 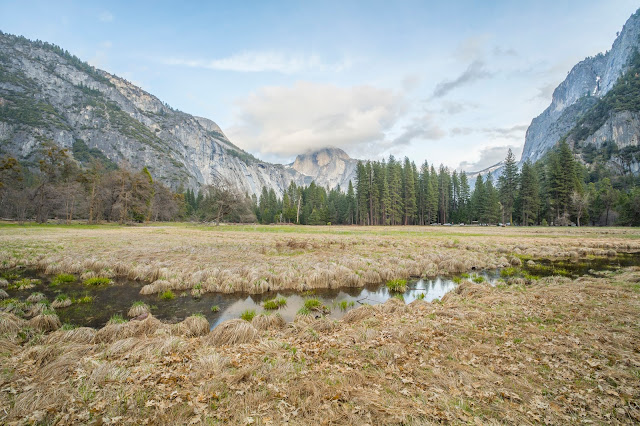 Walked deeper into Cook's Meadow and took another HDR composition of Half Dome.
Approximate GPS location (type into Google) according to the Canon GP-E2 GPS Receiver: 38 55 58 N 120 29 22 W 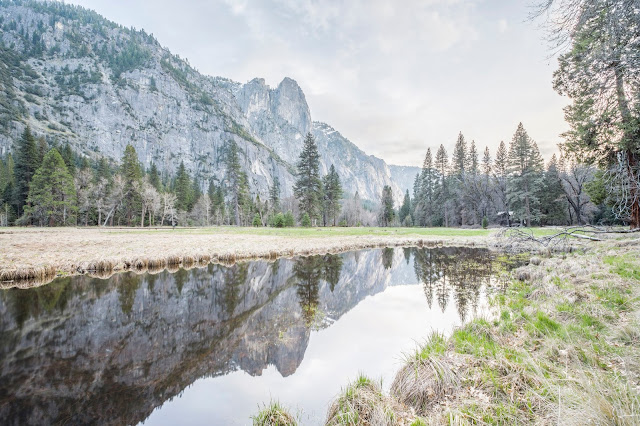 The pond in Cook's Meadow made a really nice reflection. I decided to line up the reflection and do another HDR composition.
Approximate GPS location (type into Google) according to the Canon GP-E2 GPS Receiver: 38 54 38 N 120 29 55 W

These are all the photos for today. I hope you have enjoyed them. After my photos in Cook's Meadow, it was getting late so I rushed to Lower Yosemite Falls. This means... Next time I will have photos from Lower Yosemite Fall and my hike up to Lower Yosemite Fall. Please don't forget to share my blog posts with your friends! If you would like to get notifications next time I post, you can "Like" me on Facebook or follow me on Twitter and Google+. These links can also be found on the top of the right sidebar.