Now let's introduce you to the photos for today. The photos for today was from the 2nd day of my trip. As I have stated in the previous post, after those Cook's Meadow photos, it was getting late, so I rushed over to the trail leading to Lower Yosemite Fall. Due to the lateness and the high contrasts during that time of the day, there are quite some highlight blow outs in the photos. I also have a night shot for this blog post. I hope you enjoy. 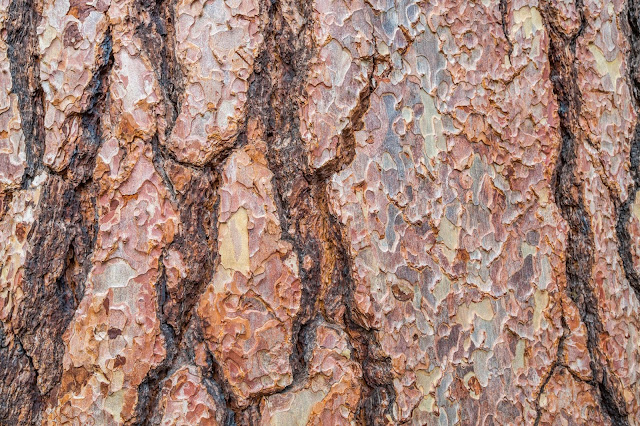 HDR composition of a close up of the bark of a Red Fir (Abies magnifica). Took this photo near the trail head leading up to Lower Yosemite Fall. 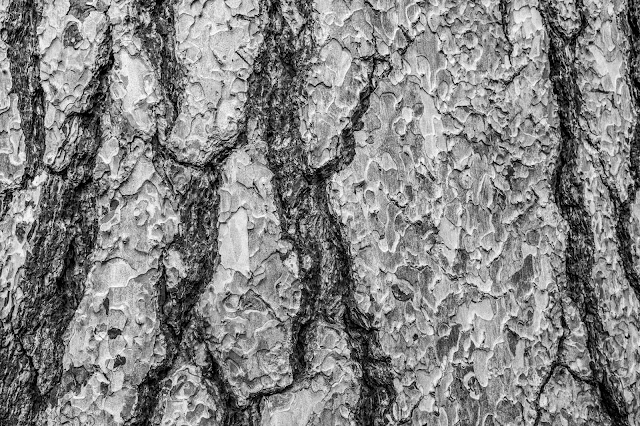 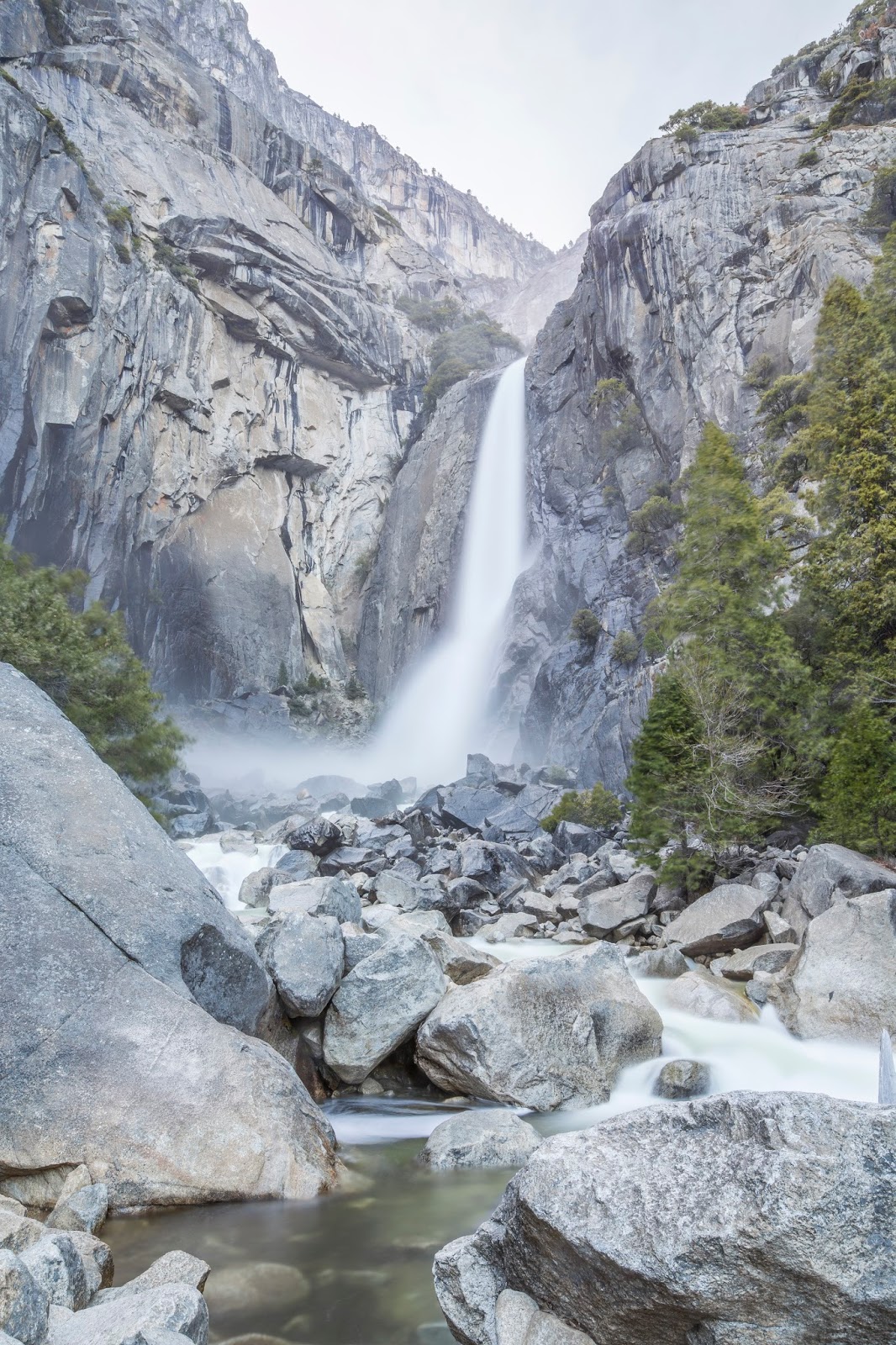 Since it was late, there was not as much light out. I managed to do a long exposure without any filters. Since the blurs on the waterfall was similar, I managed to successfully do an HDR composition. 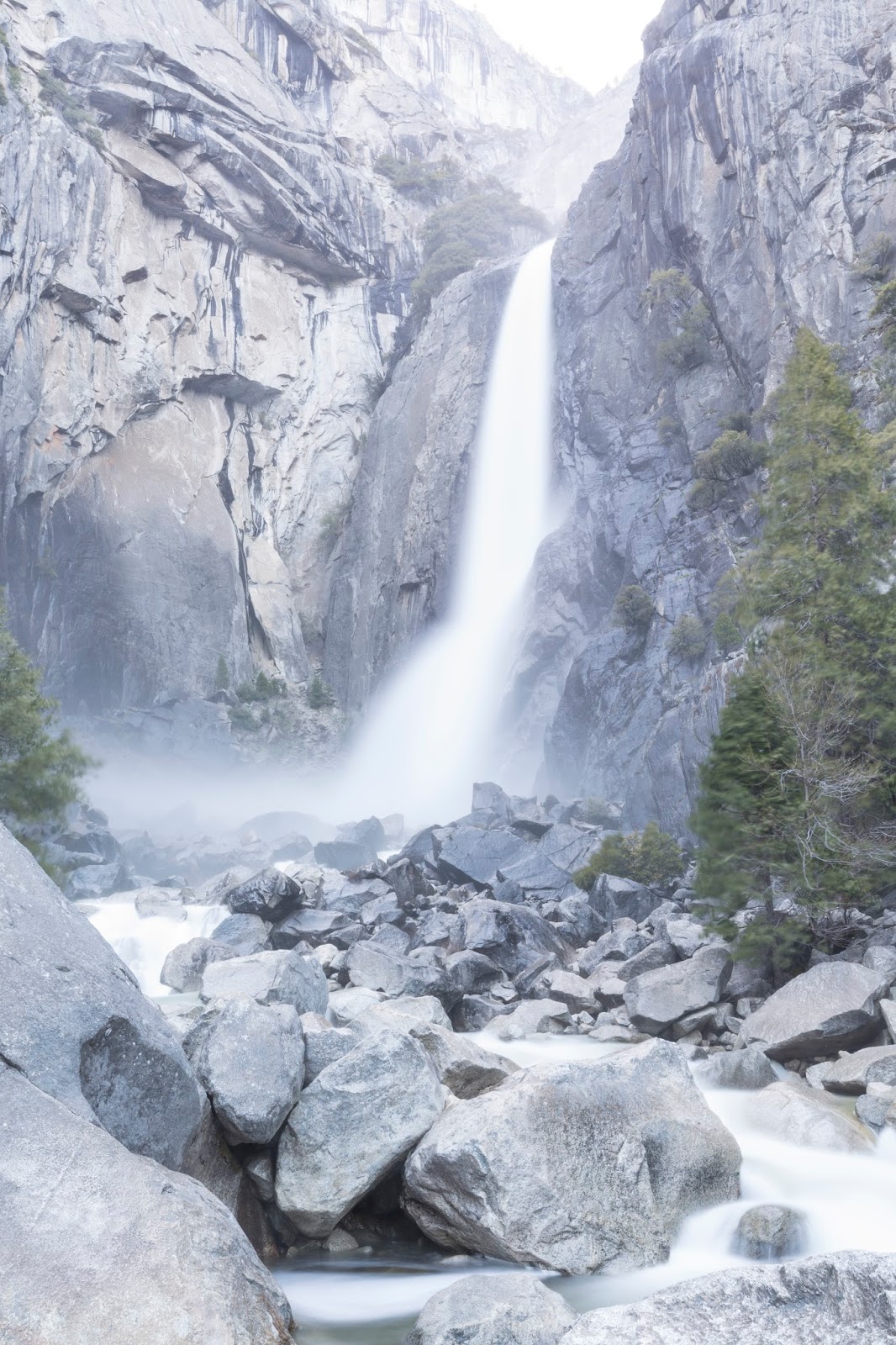 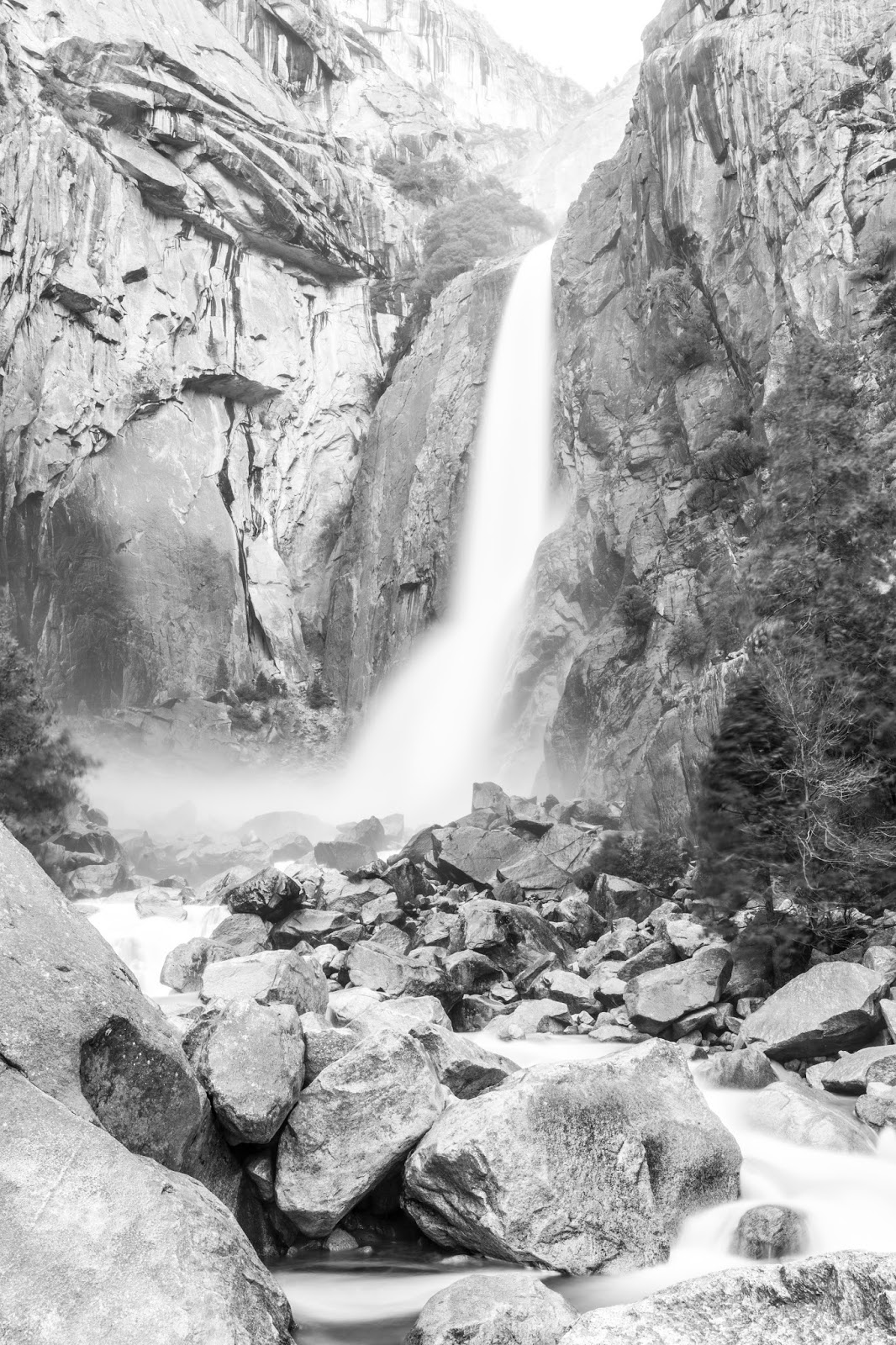 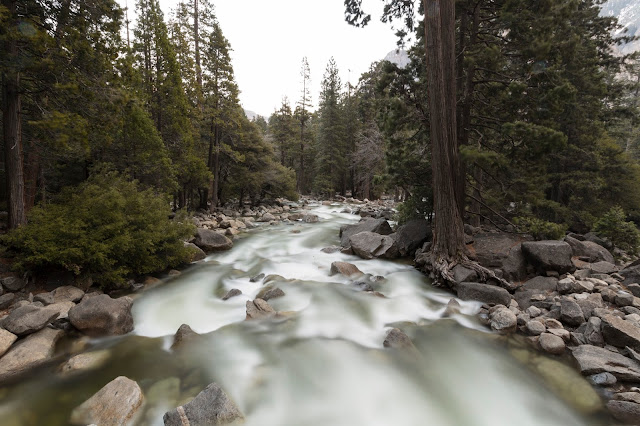 The river Yosemite Falls creates. I shot this on the bridge above the river. 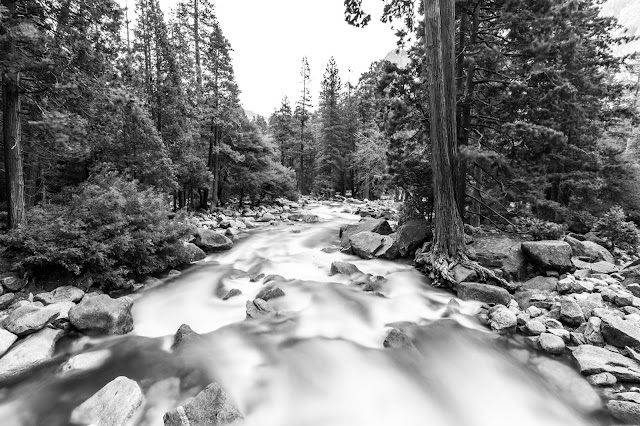 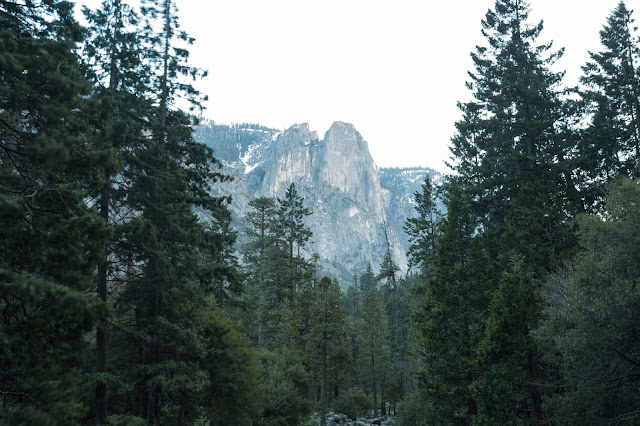 View of mountains from the view point of Lower Yosemite Fall. As you can see there is a really strong color cast due to the time of the day this was taken at. I tried my best to remove the color cast. 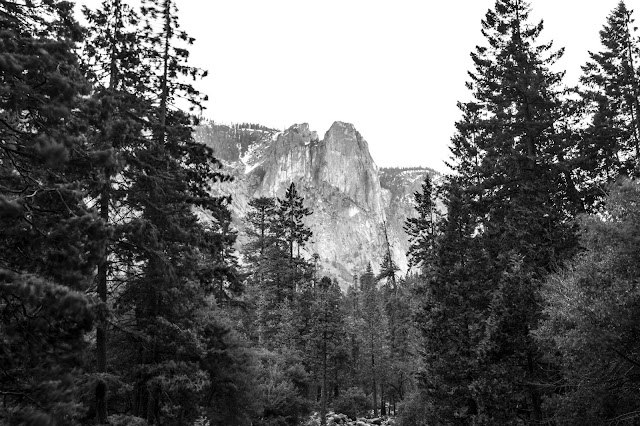 I ended up also doing a black and white process to remove all color cast on the image. 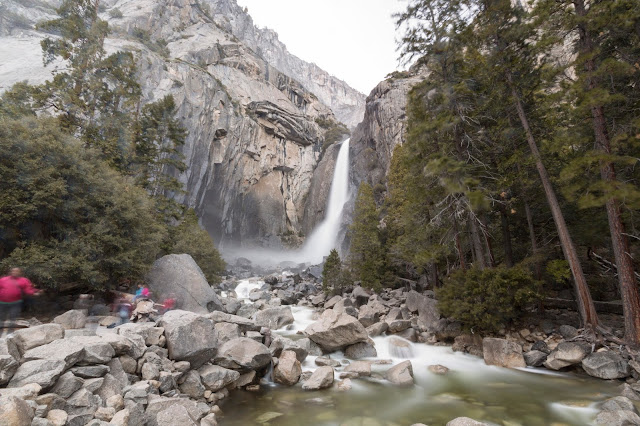 A long exposure on the bridge facing Lower Yosemite Fall. As you can see there were a few other photographers and tourists on the left. While I usually don't like tourists in my photos, one of them was a savior. He happened to be wearing a white hat, which I was able to white balance off of. :) Remember that color cast from the time of the day I shot this at? 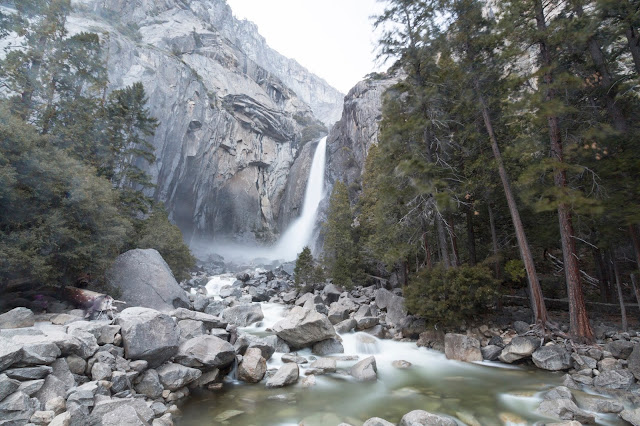 Another long exposure of Lower Yosemite fall from the bridge. Another photographer was also doing a long exposure on the left. I did my best to color balance this one, but the cast was just too much to fix. 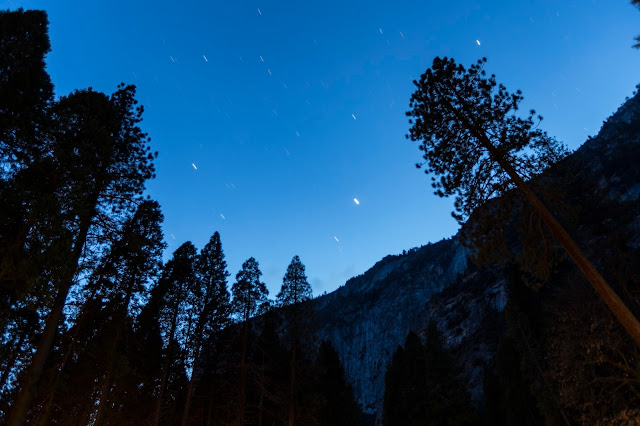 By the time I headed down from Yosemite Falls, it was pitch dark. I always bring flashlights in my camera bag. Never know when you'll need it. I actually did 2 long exposures on the way down, but the other one didn't turn out very well (severely underexposed). This was the one that turned out well. I shot this outside of the bathroom at the trail head (because my dad needed to go). 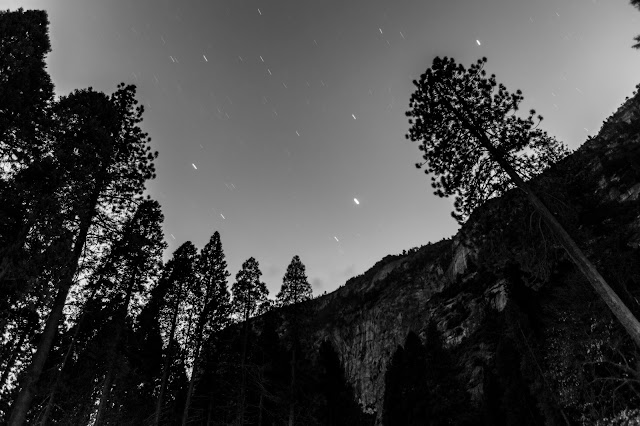 Thought a black and white process would be pretty nice too.

These are all the photos for today and from my 2nd day. I hope you have enjoyed them. Next time I will have photos from the 3rd day of my trip from Swinging Bridge in Yosemite National Park. Please don't forget to share my blog posts with your friends! If you would like to get notifications next time I post, you can "Like" me on Facebook or follow me on Twitter and Google+. These links can also be found on the top of the right sidebar.