Now let's introduce you to the photos for today. The photos for today was from the first day of my trip traveling from the SF Bay Area to Yosemite Cedar Lodge, a hotel near Yosemite National Park. I took many photos on the road and as stated before will be split into 2 parts, with this one being the 2nd one. See the previous post for the first part. All of the photos today was taken on California State Route 140 (SR-140). The photos will include photos of Midpines, CA, photos of the ghost town in Stanislaus National Forest (left over from California's Gold Rush I think), and photos of the Ferguson Rockslide. 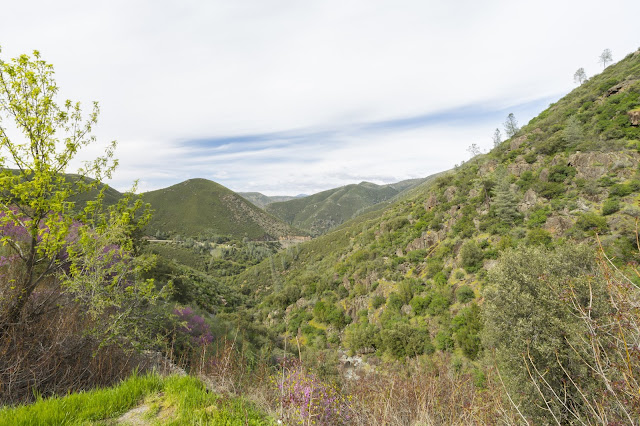 After leaving Catheys Valley, CA, I started entering the wilderness. According to Google Maps, this is Midpines, CA.
Approximate GPS location (type into Google) according to the Canon GP-E2 GPS Receiver: 37 34 58 N 119 57 37 W 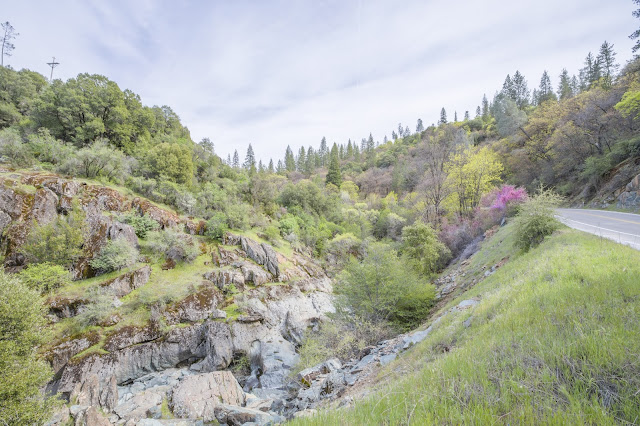 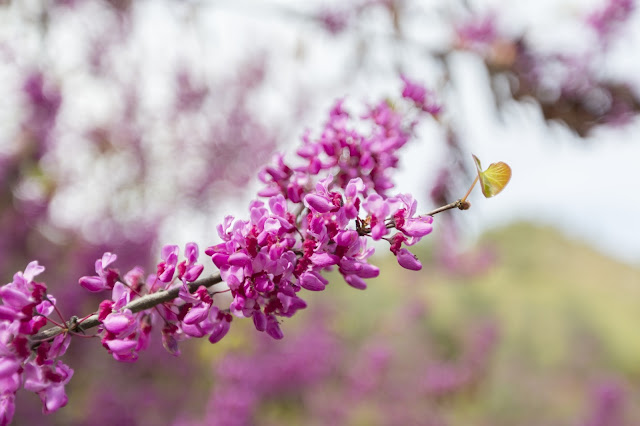 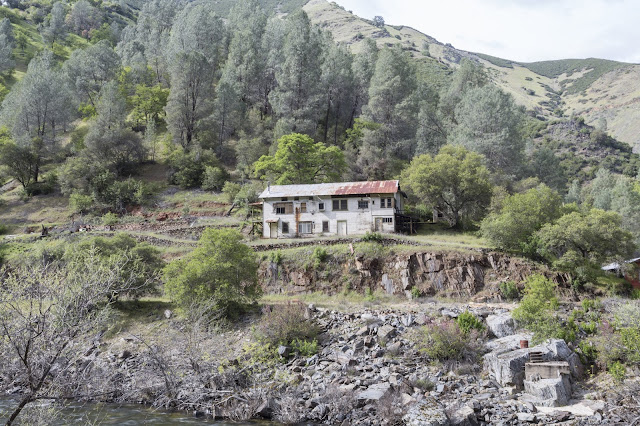 Ghost town in Stanislaus National Forest (left over from California's Gold Rush I think). What is weird after close examination of some of my photos at 100%, it seems people still use the abandoned buildings. For this house there, there is an alarm system on the house (Bay Alarm). The blinds on the house doesn't seem to be very old. The doors on the house seems to be locked and there are Private Property and No Trespassing signs on the building. What puzzles me is the fact that there is no way across the river for another 15 miles and there are no paved roads and the unpaved road is closed and definitely isn't wide enough for a car. You would have to hike 30 miles to get to the house! There are only 2 guesses at who uses the house. People doing something illegal or possibly hikers who camp inside the house overnight before making the journey back. Just my guess anyways.

Update March 10th, 2018: I just received an email from one of the relatives of the previous landowner for these buildings. She tells me her relatives used to run a hotel here long time ago before finally selling the property. There used to be a bridge that goes over there that was washed out long ago. There still may be a dirt road that goes there if it wasn't weathered away. 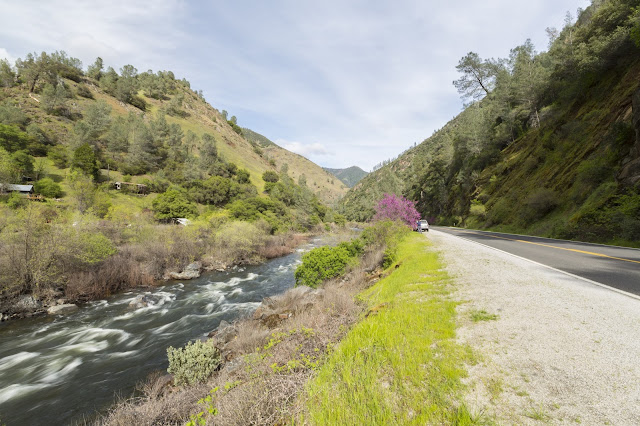 A photo of the Merced River near the ghost town. 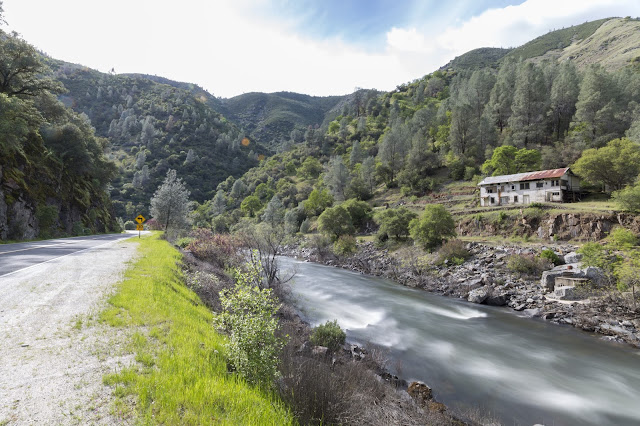 After the first shot, I decided to put on an ND filter to get a long exposure of the river.

Photography Tip: The use of ND filters allows you to get long exposures even during the middle of the day! This is useful when you want to blur out rivers, waterfalls, and even people walking by! With blurring out people walking by, you can get photos of very crowded places with barely any people showing through (as long as most of them are moving around). Just remember when buying ND filters, do not cheap out! Cheap filters will color cast and blur your images in ways you do not want! Brands of ND filters I would recommend are the Big Lee Stopper, B+W, and Hoya. 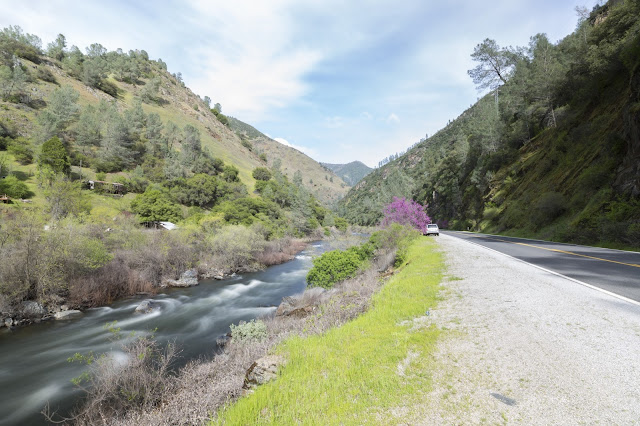 Another long exposure of the Merced River using my ND filter. 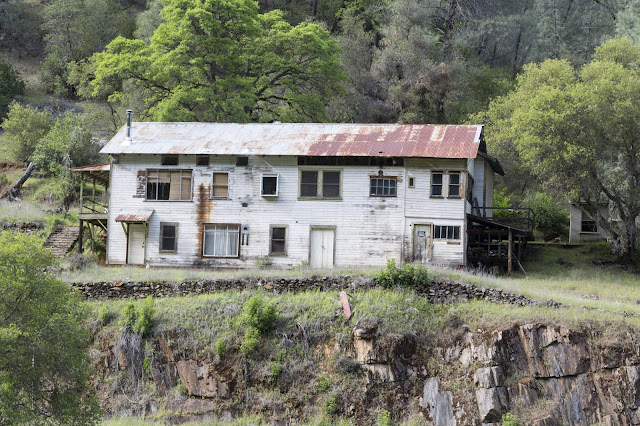 While I did not notice the "not so old" stuff on the houses while I took the photo, I decided I would probably want a closer look at the house when I get home. I decided to switch on my telephoto lens for a closer shot. Here is a closer shot of the house. If you want to see a full resolution photo to see for yourself the "not so old" stuff on the house, please email me at the email provided on my  "About the Photographer" page. Make sure you mention or link me the blog post when emailing me. 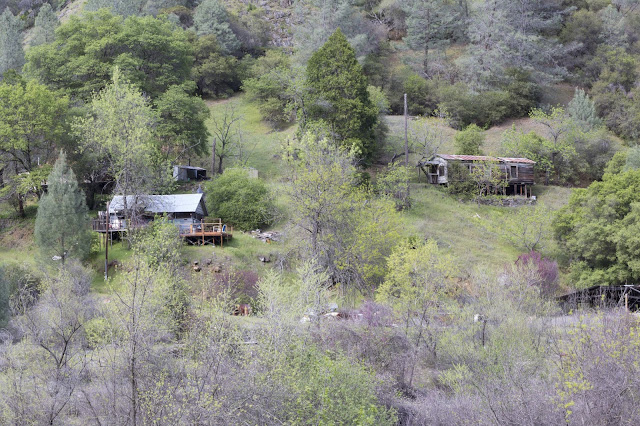 On the left house over there, there is what a believe is a "No Trespassing" sign on the front door. On the right house, there are several modern lawn chairs on the deck! Definitely someone using the house. Not sure who it would be. Again, 30 mile hike! Again, if you want to see a full resolution photo to see for yourself the "not so old" stuff on the house, please email me at the email provided on my  "About the Photographer" page. Make sure you mention or link me the blog post when emailing me. 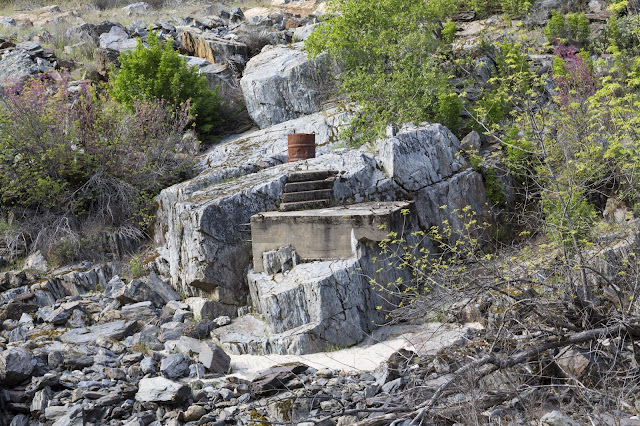 Some stairs leading down to the river and a rusted old storage tank. This doesn't seem too out of the ordinary for a ghost town. 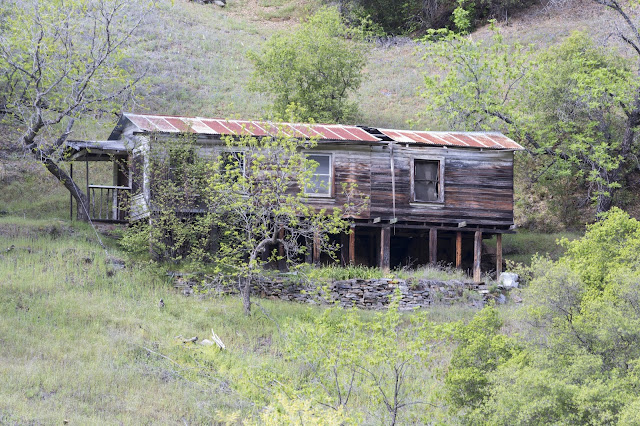 A closer photo of the house on the left in the shot 1 photo above. What seems out of the ordinary for a ghost town is on the hand rails at the front door, there is some sort of "blue dome". I can't quite make out what it is but it seems "modern". 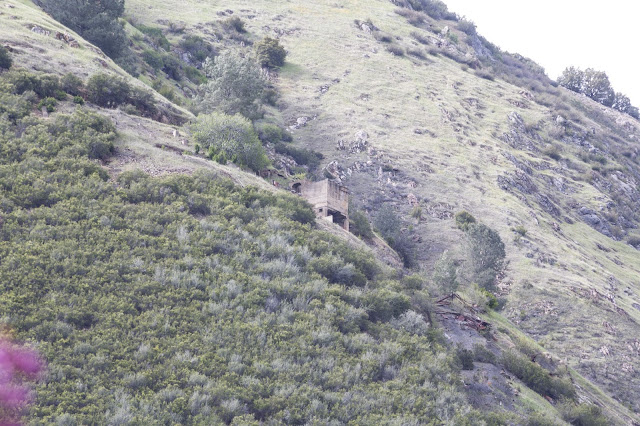 Up on the hill there was this building. After some Googling, it seems to be a railroad station back in the Gold Rush days now abandoned. Not too sure though. 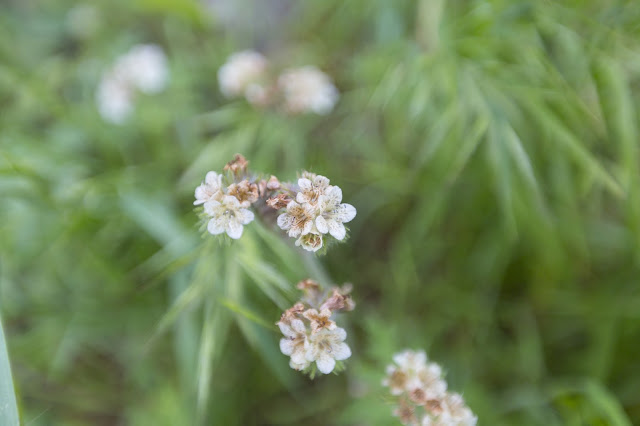 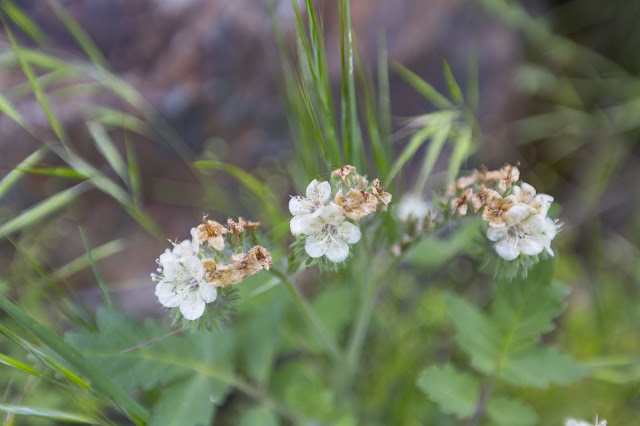 You know that part of SR-140 where you have to detour to a one lane road and there are traffic lights controlling the area? That was because the original highway was buried by the Ferguson Rockslide. I took these flower photos while waiting for the traffic light to change. 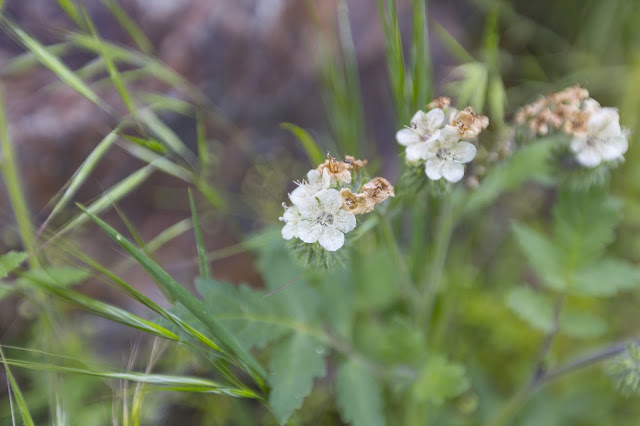 Another shot of the Caterpillar Phacelia (Phacelia cicutaria). 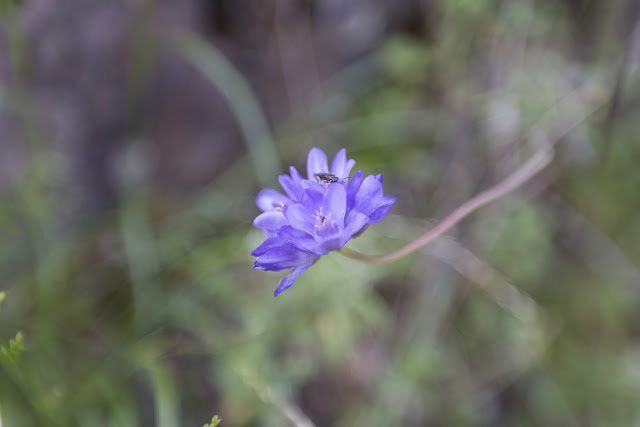 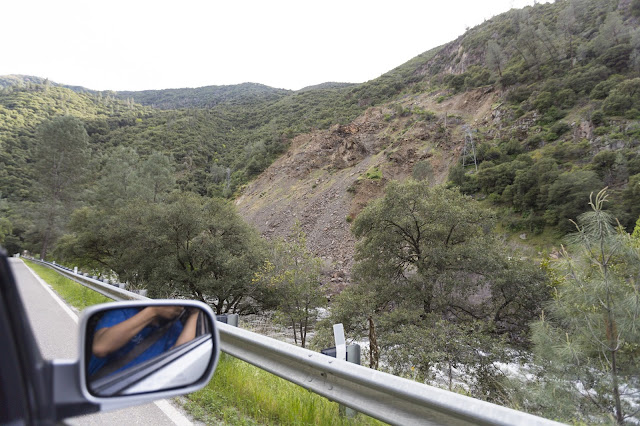 The traffic light finally changed and about 15 cars (including me) got to proceed on the one lane detour. I quickly shot a few photos of the Ferguson Rockslide. That is me in the rear view mirror. 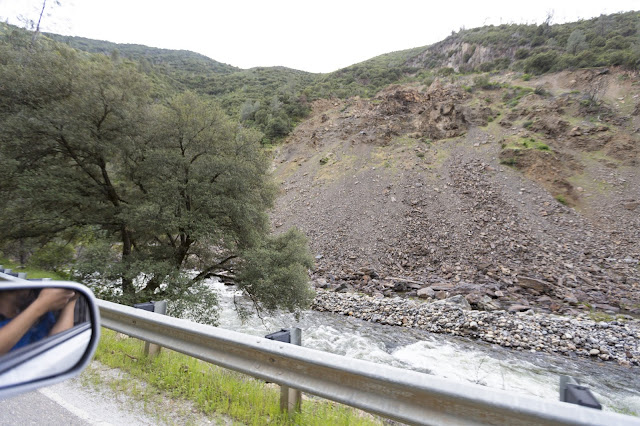 A photo of where the highway used to be. 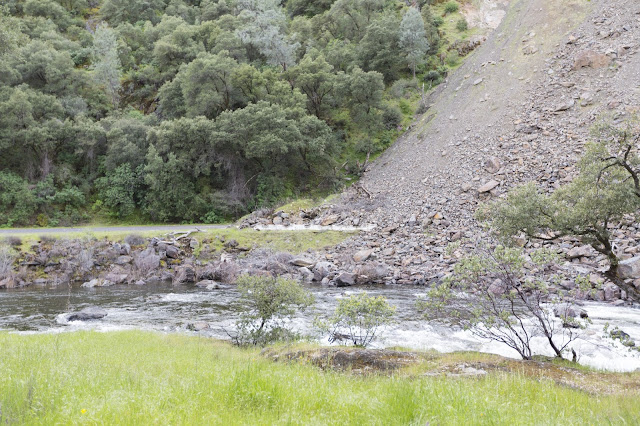 See the old road in this image? I hope no one got buried under that.

These are all the photos for today. I hope you have enjoyed them. Next time I will be posting photos from and near Yosemite Cedar Lodge. The hotel had quite some interesting aspects including bear statues. Please don't forget to share my blog posts with your friends! If you would like to get notifications next time I post, you can "Like" me on Facebook or follow me on Twitter and Google+. These links can also be found on the top of the right sidebar.