Now let's introduce you to the photos for today. I will begin the photos I took at Mono Lake today, finishing them off in the next post. As I said above, Mono Lake is a salt lake east of Yosemite National Park that is located in Mono County, California. The small town of Lee Vining borders the lake and that is where I stayed overnight. The lake covers a total of 45,133 acres or 182.65 km². The lake is famous for its high salt content and its tufa formations. If you are visiting Mono Lake and are driving there from the SF Bay Area, may I suggest also visiting Bodie State Historic Park which is a ghost town near the area. I didn't visit that area because apparently I had no clue of its existence the time I went until a fan of mine on G+ posted some photos up. The park itself is not very far away from Mono Lake, and in fact you kind of pass it if you take the route I did. I'd say there is an extra 5 miles there and 5 miles back (the road to the park is a dead end according to Google Maps). From my fan's photos, I'd say the park is great for star trails photography at night because the buildings at the ghost town really make great foreground objects for star trails. If you are doing such photography, just make sure you pack some jackets as it will get cold. Also from the looks of the photos, some time lapse of clouds moving overhead might look good too. If I visit Mono Lake again, I will definitely go there. Enough with my amateur tourism guide. HAHA On with the photos for today. 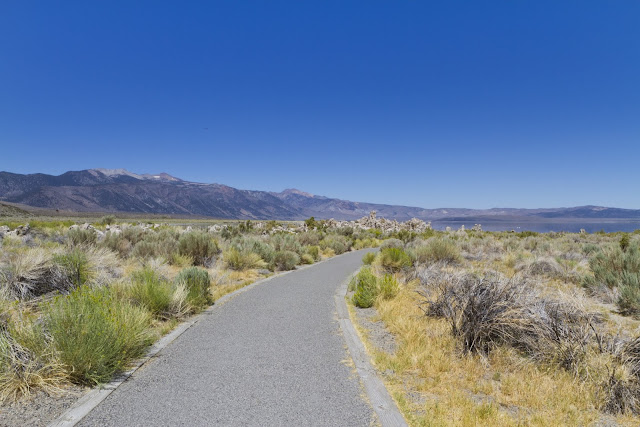 Here is a trail leading into to the beach at the lake. Mountains off in the distance and those rock formations are the tufa.

Photography Tip: Generally it helps with some landscape shots to have some lead-in lines like the one above (with the trail). It will help make the photo more pleasing to the eye. It would also help if the line fell on one of the lines in the Rule of Thirds. This is where you imagine dividing the shot up in 1/3 pieces both horizontally and vertically as if there is a grid over your camera. In certain cameras, you can actually enable the Rule of Thirds grid. How you do that is different in every camera. As with camera specific controls, the best way to figure it out is to read your instruction manual or contact the customer support of the company that made the camera. 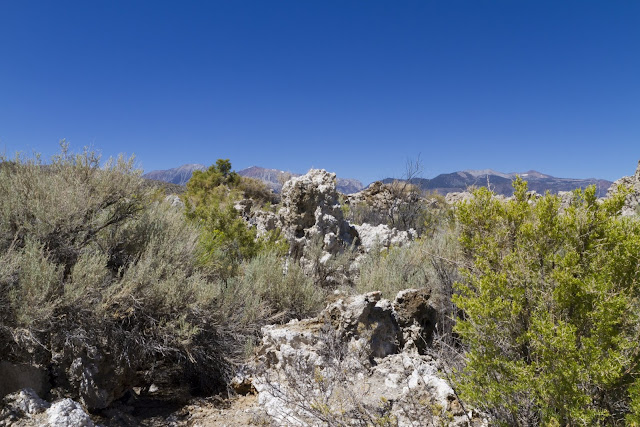 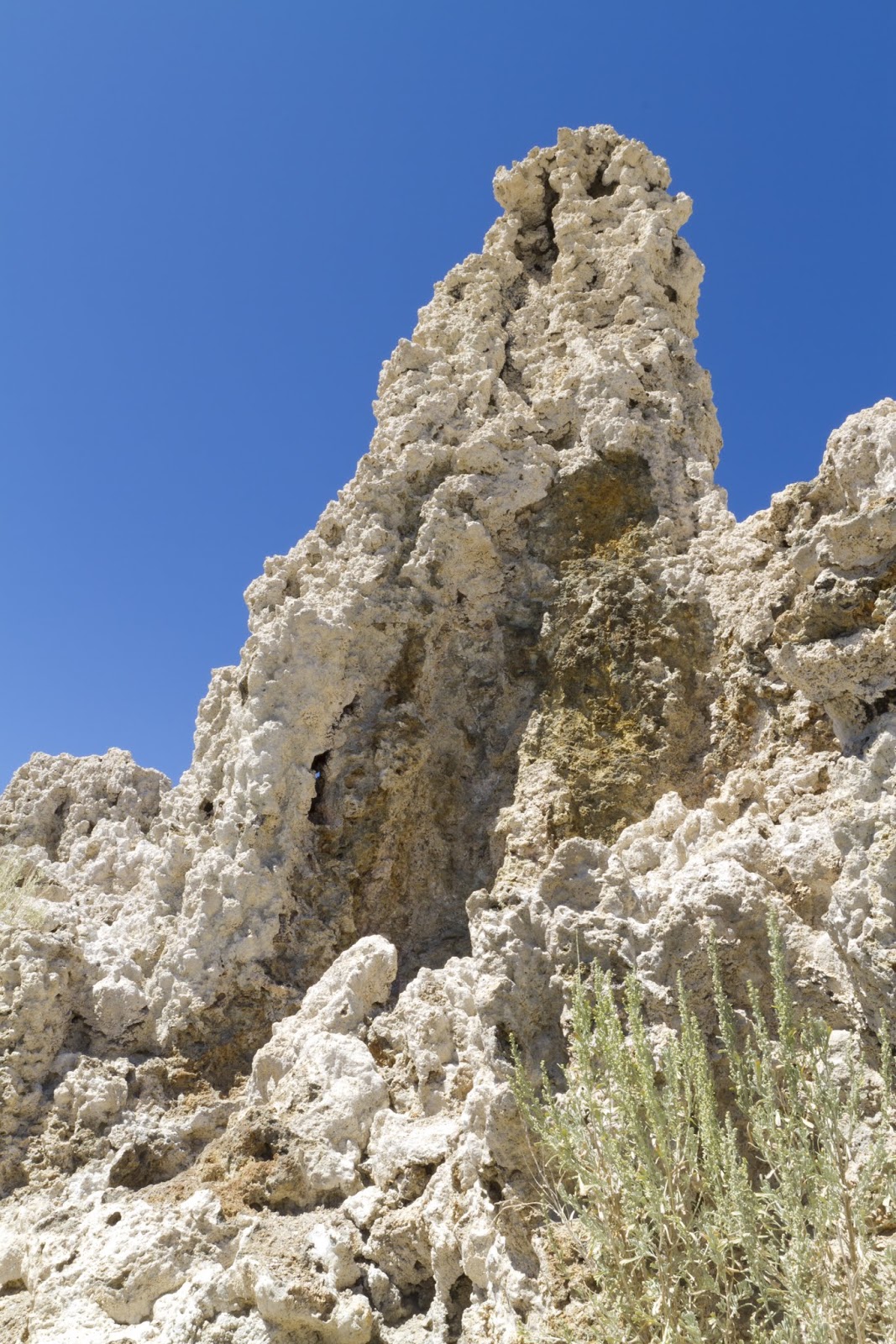 I got closer to the tufa and did a vertical shot of a tall tufa. Wish there was some clouds in the sky, but there wasn't. Would have probably spiced up the shot a bit. 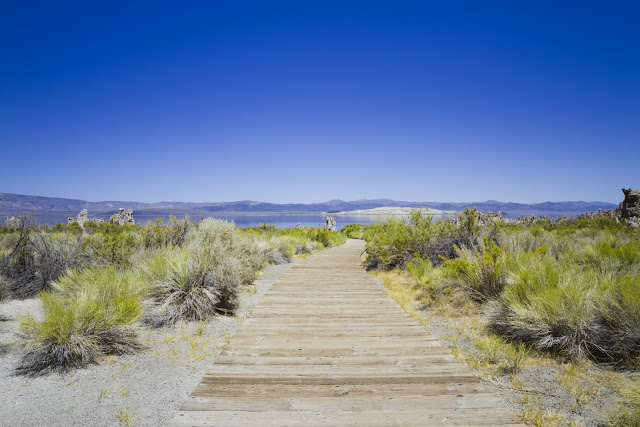 Again with the lead-in lines tip from above. As you can see in this shot, the rule of thirds was not used and I used the boardwalk as a lead-in line in the center. As always, rules are meant to be broken, at least in photography. 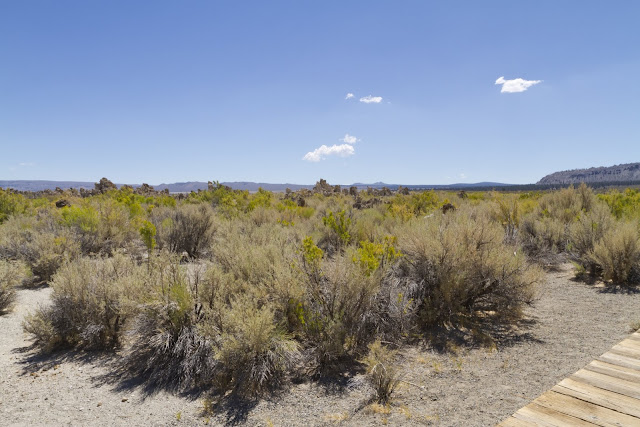 Some clouds starting to float into the area. YAY! See how much better the shot looks than just having a blue sky? 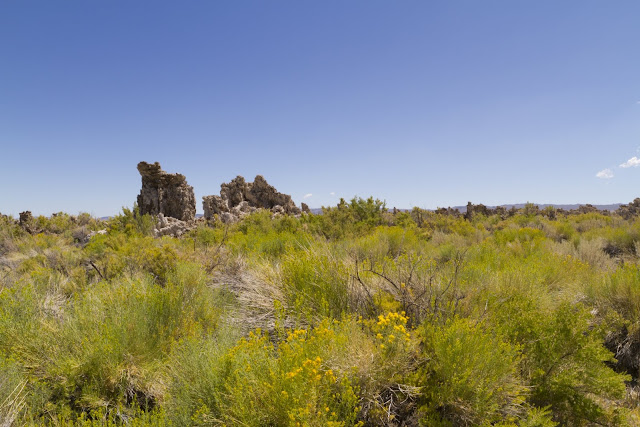 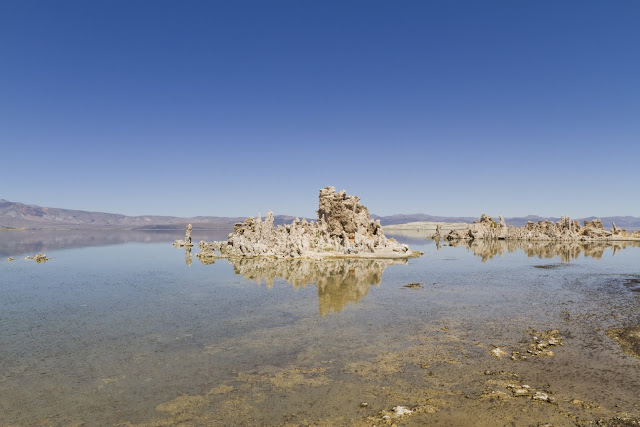 Here is the lake it self with tufa in the middle of the lake. Those dots you see on the lake are horseflies. (I'll have a closer look later in this post) Those things hurt when they bite. I got bit when I was there. Not poisonous, just hurts like heck and make you bleed. If you get bitten, just shoo it off. 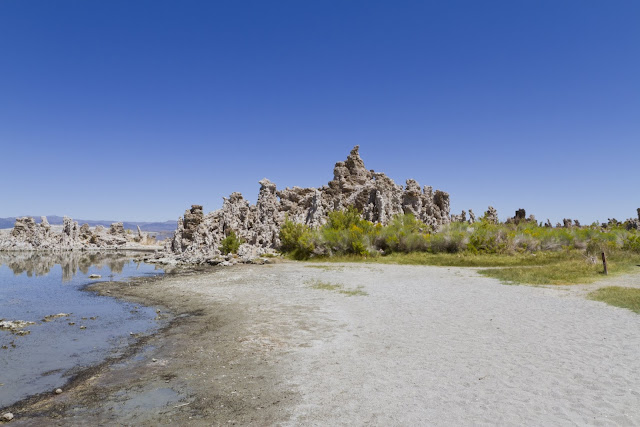 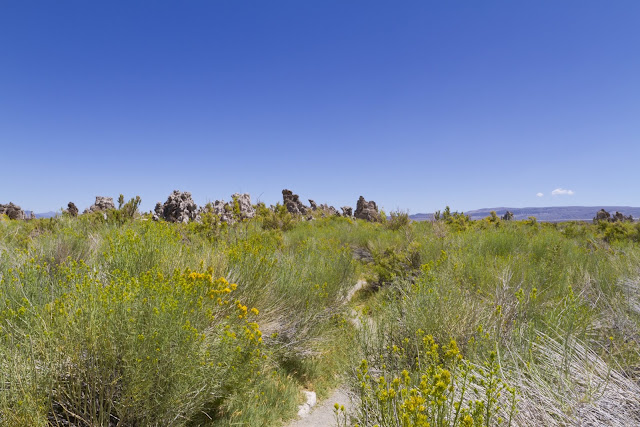 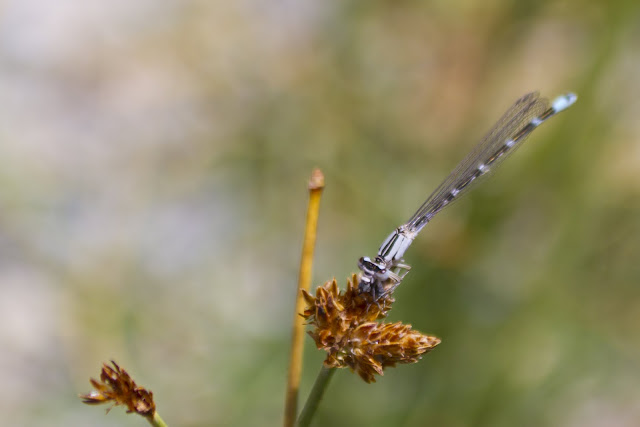 Here is a closeup shot of a dragonfly. There were many dragonflies flying around there. I will have more photos of these in the next blog post. 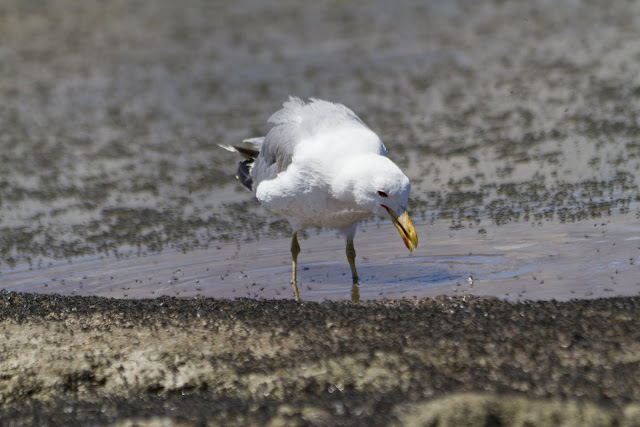 There are many seagulls there at the lake. It is a salt water lake right. 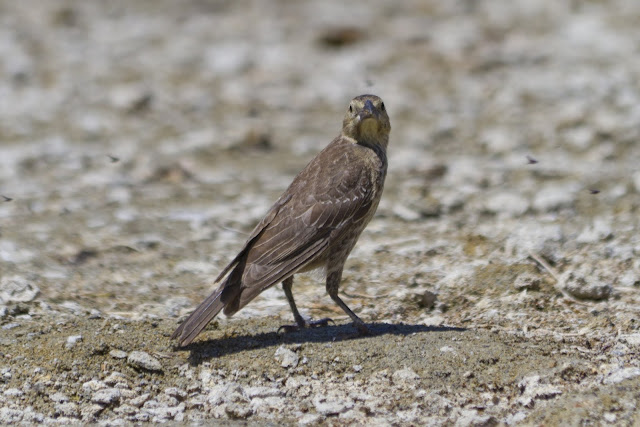 I think this is a finch of some sort and I also think its a female due to its brown color and lack of detail. Because a lot of female birds look a like without some sort of feature to distinguish them from one another (at least to regular human eyes), I'm going to leave this bird nameless unless someone can give me a hint below in the comments. 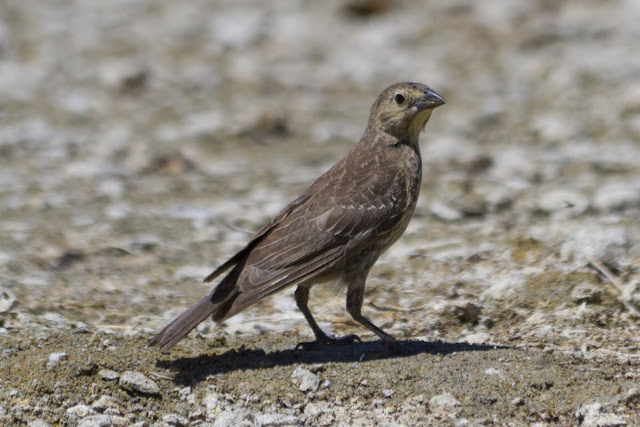 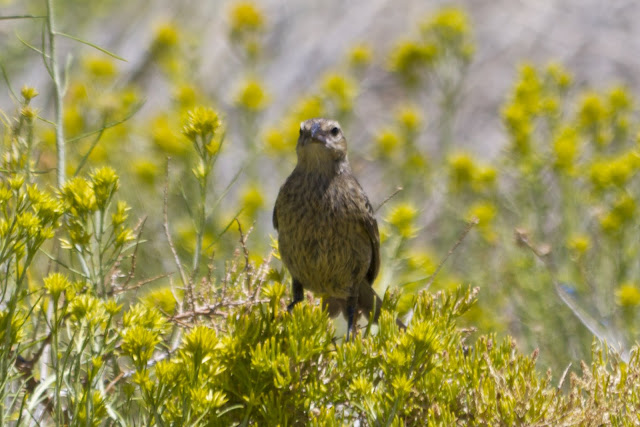 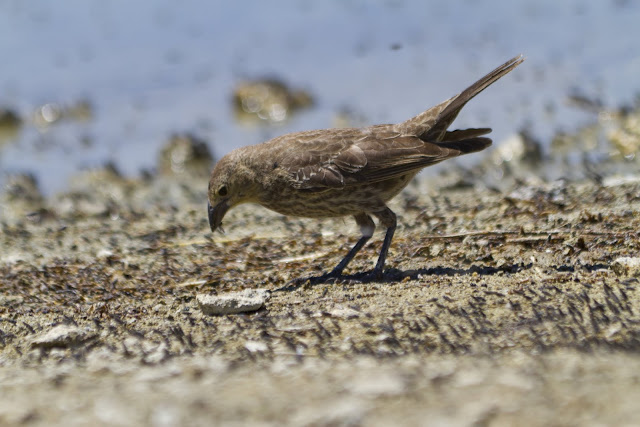 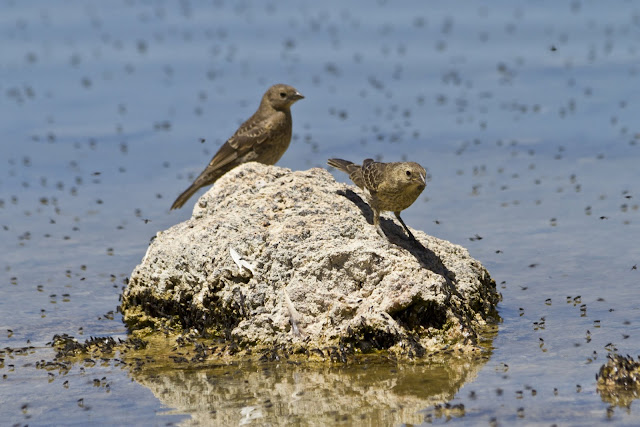 Like I said above, I have closer shots of the horseflies on the lake. I was aiming for the birds, but when I zoomed in on my computer, I can see the flies too. :/ Looks disgusting.

These are all the photos for today. I hope you have enjoyed these photos. Next time I post, I will finish off Mono Lake photos (including some landscapes and close ups) and I will begin my Yosemite National Park photos. Please don't forget to share my blog posts with your friends! If you would like to get notifications next time I post, you can "Like" me on Facebook or follow me on Twitter and Google+. These links can also be found on the top of the right sidebar.